Coronation Street 04/11 - Yasmeen's Party Goes Off With A Bang

As Sharif helps Sonia with her move to the corner shop flat, Yasmeen confides in an astounded Alya that in part she blames herself for failing to be an attentive wife. Later, Yasmeen masks her anger by telling Sonia to come to the party as she’d really appreciate her company. With their engagement celebration underway, Zeedan introduces Sharif and Yasmeen to Rana’s parents but tensions mount as Rana’s mother looks disapprovingly at her daughter’s outfit and Sharif’s unnerved to see Sonia in attendance. As Sharif presents Rana with Jamila’s necklace and Zeedan makes a heartfelt speech, Yasmeen is no longer able to contain her anger and announces that Sharif has been having an affair for years. The guests reel in shock.

The police quiz Tyrone about the abusive texts Maria sent to Caz. Tyrone sticks up for Maria pointing out that Caz may not be telling the truth. Meanwhile Maria calls Pablo and warns him to be careful what he tells the police. Aidan assures Maria he believes she’s innocent and will help her in any way he can but Fiz is speechless when she shows Tyrone a blood stained rug which she found in their bin. Clearly shaken, will Fiz and Tyrone go to the police?

When Cathy suggests a church wedding Roy’s not keen and they settle on a civil service but is this what Cathy really wants? Meanwhile, Roy asks Alex to be his best man, Alex is thrilled and announces he’ll be bringing a girl along...

Michael reveals to Sarah his plans to renew his vows and Sarah assures him Gail will be touched at such a romantic gesture. Sarah and Bethany offer to help organise a bonfire party for the kids but how will Sarah react when Bethany invites Gary? Meanwhile as Anna regains consciousness how will she react on seeing the extent of her injuries.

Having ushered everyone out, Yasmeen turns on Sharif and Sonia demanding to know how long they’ve been seeing each other. When Sharif reveals that it’s 7 years, Yasmeen’s devastated and orders Sonia to leave. Alya and Zeedan return home to their warring grandparents. Guilt-ridden, Alya reveals that she’s known about the affair for over a month and that she blackmailed Sharif to invest in her new business venture, how will Yasmeen and Zeedan react to this fresh blow?

When the police reveal that a mobile phone was purchased with a credit card in Maria’s name and the abusive messages were sent from that phone, Maria’s horrified. Cash withdrawals were also made in London using the credit card and it dawns on Maria that Caz must have followed her down there. Maria confides in Aidan how the police seem to think she’s killed Caz and Aidan hugs her close. What has happened to Caz?

Roy and Cathy return home just as Gemma emerges from the shower but Alex covers. A love struck Alex tells Roy and Cathy he’d like to invite Gemma to their wedding along with Nessa. After a change of heart, Roy tells Cathy he’d be more than happy to have a church wedding but is it too little too late?

Telling Gail how much he loves her, Michael reveals his plans for them to renew their vows. At the bonfire party, Gary assures David he knows the crash was an accident and doesn’t blame him for Anna’s injuries but David’s still consumed with guilt. As Gary makes to leave, Sarah has something she wants to tell him, but what? Meanwhile, not wishing to be a burden, Anna tells Kevin she doesn’t love him any more and they’re finished, but is this what she really wants?
​​​​​​​ 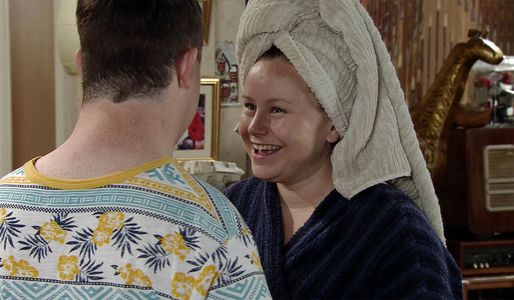