Lloyd’s disappointed when Andrea doesn’t turn up at the race but continues to goad Steve. During the race Steve accidentally trips up Lloyd and Lloyd’s furious when he crosses the finish line before him. During a squabble with Steve, Lloyd collapses. Is he going to be okay?

Sophie’s worried about Sally when she hears from Sean that Tim’s walked out on her.

Owen confronts Anna wanting to get to the bottom of what’s bothering her.
​
Elsewhere, Dennis tries to get back into Rita’s good books and looks for a job. Kal lets Nick beat him in the race and Mary’s proud when Dev crosses the finish line.

Steve blames himself for Lloyd’s heart attack. Andrea arrives at the hospital and spins Lloyd a story about having to rush to the aid of a friend. Lloyd believes her, but Jenna and Eileen are suspicious.

Owen is becoming worried about Anna’s behaviour and when she snaps at Faye, Owen thinks money worries are behind her outbursts. Owen wants Anna to be happy, but what is he willing to sacrifice to help his partner?

Jason tells Tim he needs to fight to get Sally back. Calling round to collect the rest of his stuff he kisses Sally and she kisses him back.
​
Elsewhere Dennis is devastated when Rita tells him she can no longer trust him and he has to find somewhere else to live. Julie hands Izzy the charity money they raised from the race which Izzy promises to add to the fund. 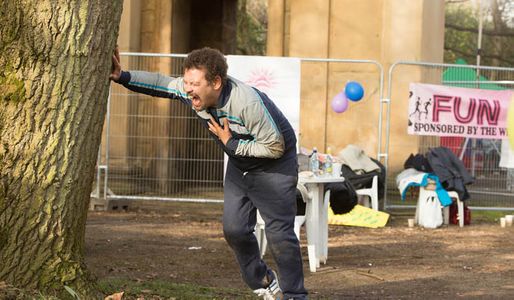