Audrey, Nick and Gail are horrified when they see posters of Clayton dotted around the Street and wonder if this was David’s doing. The police turn up at No.8 and arrestDavid on suspicion of perverting the course of justice but David denies all knowledge. But when the police later reveal that Macca has sustained a serious head injury and that they suspect David’s responsible, what will David say and can he think of a reasonable alibi?

Eileen is suspicious when Tim tells her he dropped Vinny off at a casino and she decides to go after him, wanting to know what he is up to. But with Phelan having given him a tip off, Vinny manages to hide the fake passports he’s acquired from a dodgy contact and tells Eileen that he was meeting a potential buyer to discuss the purchase of the lake view apartment. But when Eileen later hears that Rita has already signed a contract for this very same apartment she realises all is certainly not as it seems...

Freddie is panicked when Audrey wants to take him dancing and he confides in Tyrone and Luke that he has two left feet. In a bid to help him out,Tyrone calls upon the help of Norris who gives Freddie a ballroom dancing lesson. But who will be sporting a broken wrist by the end of the day?

Tim is delighted when Tommy Orpington calls into the cab office and stay for a game of subbuteo, and Gemma is excited to reveal she’s won the Weatherfield Good Samaritan Award.​​​ 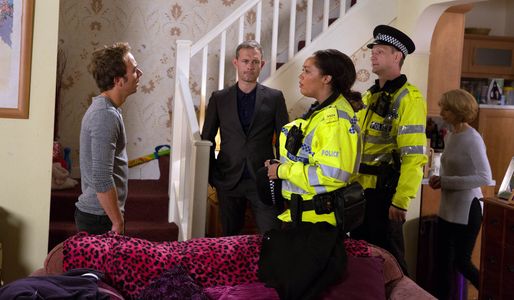