When the wife of the man who sold Kevin the sofa calls in the garage and explains she’d like her sofa back, as her husband only sold it out of spite as they’re getting divorced, Kevin panics. Clearly smitten by Diane, he tells her he sold the sofa to a random guy in the pub. Diane insists they go for a drink to see if they can find him. In the Rovers Diane flirts with Kevin and they exchange phone numbers so Kevin can contact her if he tracks down the sofa. But with Sally now loving her new sofa, will she and Tim agree to help Kevin out?

Sean’s excited at the thought of a big night out with his mates, hoping that he might get lucky and meet Mr Right. But as his mates cry off one by one he’s disappointed when only Sinead remains up for a night on the tiles.

Yasmeen suggests to Sharif they should look at buying No.6 which is going up for auction.

Carla hands Michelle a cheque to cover Tracy’s debts and pay off the wedding suppliers. When Michelle calls in Barlow’s Buys and tells Tracy she’s off the hook as Carla’s paid her debts, how will Tracy react?

Diane arrives for her evening with Kevin. Desperate to keep the sofa debacle a secret, Kevin suggests the bistro. But when Sally and Tim join them Kevin’s horrified, worried that Sally will mention the sofa. Realising that Diane’s a cut above, Sally’s instantly impressed and wonders how she and Kevin met. Kevin quickly changes the subject. But when Sally suggests Kevin and Diane come back for a night-cap, how will Kevin get out of that one? After a brief kiss from Diane he’s enraptured but knows he’s stuck in a real predicament.

Sean and Sinead are about to head home after an uneventful evening when suddenly Sean’s luck changes and Billy introduces himself, explaining he’s the new vicar at St Mary’s. As Sean and Billy exchange phone numbers, Sean’s walking on air.

Tracy pours over her accounts, worried at the lack of business. Ken points out she should be grateful that Carla’s paid off her wedding debts.

​Yasmeen does her best to persuade Sharif that buying No.6 would be a good idea as it’s so convenient for the gym and the community centre. 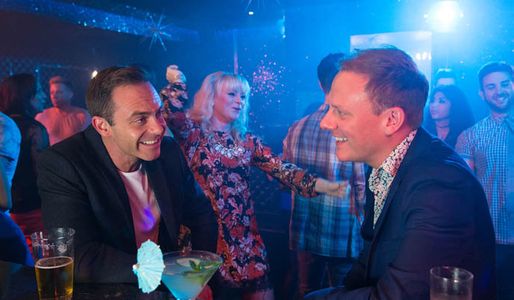