Having been told to move out Jenny’s upset, while Gemma’s skeptical, assuming Jenny will only miss Johnny’s money. Jenny tries to apologise to Johnny, claiming she was only looking out for Eva, but he’s disbelieving. In a bid to make amends with Jenny, Gemma phones Johnny masquerading as a potential client and arranging to meet him in the bistro. Meanwhile Aidan confronts Johnny about his retirement u-turn and as a row escalates Aidan tells him he’s going to set up in competition. Apologising to Jenny, Gemma explains how she’s lured Johnny to the bistro so they can kiss and makeup. But when Jenny turns up, Johnny’s furious to realise he’s been duped and as Jenny begs for a second chance he sacks he on the spot. Is it over for Jenny and Johnny.

Pointing out they’re both single, Steph talks a reluctant Robert into meeting her friend Peggy for a date. As Robert and Michelle enjoy a cosy chat in the bistro, Steph reminds him of his date with Peggy. Clearly not keen, Robert sets off and Michelle’s bemused.

Liz is annoyed to discover that Toyah’s arranging a baby shower for Leanne on the same day she’s planning to hold Michelle’s baby shower. When Eva overhears Toyah discussing the baby shower with Leanne, she’s annoyed to realise Toyah’s taking all the credit and quickly points out it was her idea. Having found out from Liz that she was supposed to do a trial shift, Toyah rows with Eva for failing to pass on the message. Leanne’s furious with the pair of them as they lock horns in spectacular fashion...

When Billy tells Shona he’s found her a job at the café, Shona panics, knowing she’s bound to come face to face with David. Meanwhile, keen to have a grandchild, Yasmeen gives Rana some ovulation kits so she can maximise her chances and Rana feels terrible. But when her contraception pills fall out of her bag, is the game up for Rana?

As Peter grabs the opportunity for a quick romp with his mystery lady, Simon is forced to cover for him yet again. With Leanne on his back, Simon’s upset at having to lie to her. Having witnessing this, Eva follows Simon and asks him to confide in her. Simon reveals he’s been forced to lie for Peter - but as he reveals what Peter’s been up to with who, how will Eva react?

Peggy arrives for her date with Robert but it’s clear his heart isn’t in it. Admitting that he’s in love with someone else, Robert calls a halt to the date. As a disappointed Peggy explains to Steph that Robert’s in love with another woman, Michelle overhears, but who is Robert’s mystery love?

Sally, Izzy, Fiz and Aidan watch the events in amazement, what does this mean for Jenny’s future. And how will Aidan react to Johnny’s decision.

Billy introduces Shona to Roy explaining that she’s interested in the job at the cafe. Meanwhile at Eileen’s suggestion, Todd calls in Roy Rolls looking for work but he’s put out to find Roy showing Shona the ropes. How will Todd react to Billy putting Shona first for a second time? When Rana finally admits to Zeedan that she’s not ready to start a family - how will Zeedan react?​​​​​​​ 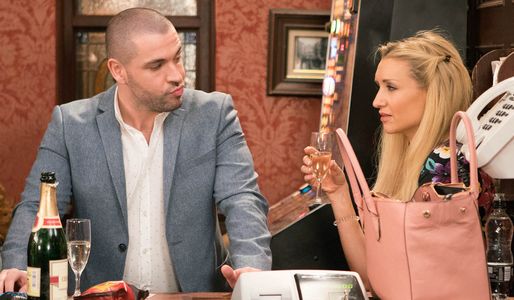