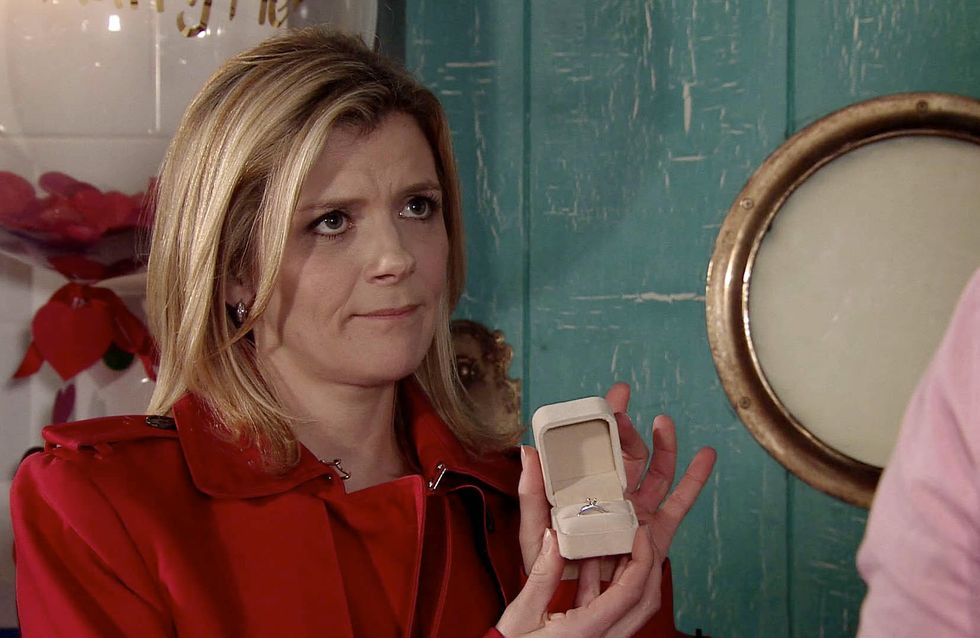 With things still tense between him and Anna over the compensation claim Tyrone adds to Kevin’s woes by reminding him he needs to sack Sophie. Sophie arrives home from Miami and dragging Kevin outside, tells him she’s brought him a surprise. Kevin’s thrilled when Rosie emerges from the taxi. As Rosie drags her vast amount of luggage into the house she talks nonstop nonsense. Kevin and Sophie are amused whilst Anna wonders what’s hit her. But it seems Rosie’s return has brought more trouble for Kevin when the police arrive with a warrant to search the house!

Leanne is stunned to discover that Nick planned to propose to her meanwhile Peter reveals to Ken and Adam that he’s in a relationship with Toyah. Peter’s surprised when Chloe gets in his cab again and telling him he’s a good listener, asks him to just drive.

Chesney begs Sinead to move back into their room but Sinead insists she’s fine on the sofa. Seeing Chesney looking really sad, Gemma decides they should try and make Sinead jealous. But Sinead pours her heart out to Daniel.

The girls celebrate Kate’s last day at the factory with cake and card. Kate’s touched. Shona discovers a cuddly rabbit on the floor in the café. Unaware whose it is, she drops it in the bin. When David calls in the café looking for Lily’s cuddly bunny, Shona denies all knowledge, guiltily realising it must be the same toy she chucked in the bin. Bored and looking to cause trouble, Seb breaks into the back yard of No.11 and steals a power tool and a t-shirt. Faye’s horrified. Unbeknown to them, Phelan clocks their actions from an upstairs window.

Explaining that they have reason to believe there are illegal drugs in the house, the police search Rosie and Sophie’s luggage. What has Rosie been caught up in? Kevin admits to Sophie he’s in financial straits because of her medical bill, the loss of the tow truck and the fire at the garage. Sophie feels terrible. Rosie shows the contents of her toilet bag to Sophie explaining it’s just some treats for her boyfriend’s mate in Manchester - but what exactly are the ‘treats’.

Having borrowed the keys from Johnny, Sinead lets Daniel into the factory where he beavers away at his studies whilst Sinead does some sewing. Alone in the factory, Daniel reads a poem to Sinead and likens her to the main character. The spark between them is evident.

Leanne bursts into the bistro kitchen and waving the engagement ring at Nick, asks him to propose to her. Is it too late?

Shona climbs in the café food bin and retrieves Lily’s cuddly bunny. Shona returns Lily’s toy to David explaining she found it in the bin. David’s grateful and asks her to drop it at No.8. Phelan accosts Seb and Faye in the ginnel and marches them back to No.11. Eileen suggests Phelan should report Seb for theft but Phelan has other ideas and tells Seb he can help him rip out a kitchen as his punishment. Faye’s relieved. Peter suggests Toyah move in with him at the bookie’s flat.​​​​​​​ 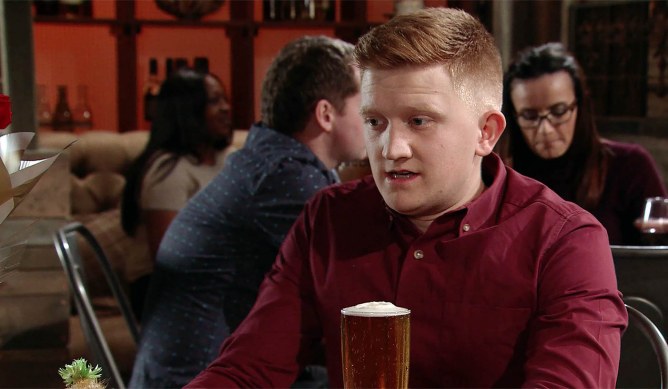