David dresses Max and Lily, explaining they’re off on holiday. Gail and Michael return from honeymoon. Nick and Sarah break the news that Erica’s pregnant, Sarah’s started a relationship with Callum and David has done a runner with the kids. Horrified Gail tries to phone David. Hearing David’s mobile ring, Max goes to answer it but David slaps his hand away. Max becomes upset and David feels terrible. Meanwhile Callum calls at No.8. He’s livid when Gail lets slip that David’s taken their passports with them. Will Callum call the police?

Declaring his love for Sean, Billy announces that he’s going to resign as vicar of St Mary’s. Sean’s deeply moved but as Billy sets off to hand in his resignation will Sean be able to stand by while Billy chooses between their relationship and the Church?

Steve returns from a walk with the dog having clearly enjoyed himself, explaining to Michelle that all the rescue centres are currently full so she’s on a waiting list. But when Michelle sees how much Steve’s spent on doggy shampoo, will she be so taken with Steve’s canine pal?

Mary tells Emily she’s not going to surrender to the council bullies and intends to stage a sit-in in her motorhome. Todd pretends to be supportive. Steve and Liz attempt to talk Michelle into having their wedding reception at the Rovers to save money. 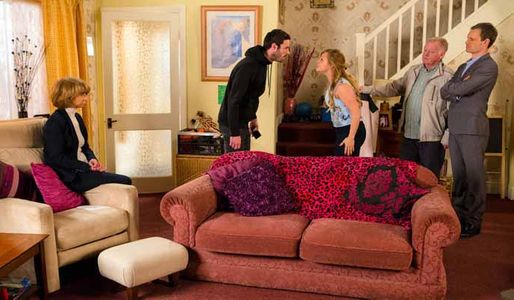