Liz confides in Eileen and Sean that she is going to see Jim and tell him to stop victimising Peter. When Tony arrives home early from his trip she tells him she is going to see a girlfriend. But how will Tony react when Sean unwittingly lets slip where Liz has really gone?

As the work begins on refurbishing the butchers and turning it into the community centre Kal asks Zeedan to go home and help prepare the Eid banquet but Zeedan says there is no way he will cook for Leanne. Alya is furious with her brother but Leanne tells Kal she feels uncomfortable causing the family problems. Meanwhile Gary and Alya find it hard to hide their feelings for each other and are nearly caught by Kal.

Kylie convinces Eva that Callum is her past and David and the kids are the only ones that matter to her.

Faced with a furious Tony at the prison gates, demanding she doesn’t go in, Liz tells him that she doesn’t do ultimatums and continues into the prison to see Jim. But once inside she is furious when Jim tells her he will lay off Peter if she carries on visiting him. Back at the Rovers she finds Tony packing his bags - will she be able to persuade him to stay?

Gary and Alya continue to flirt whilst working on the butcher’s shop and Zeedan invites Gary to join them for the Eid celebrations. Later at the bus stop Alya steps in for a kiss - is she wanting to move their relationship on?

Deirdre feels terrible about the predicament Liz is now in knowing that she went to visit Jim for her sake. 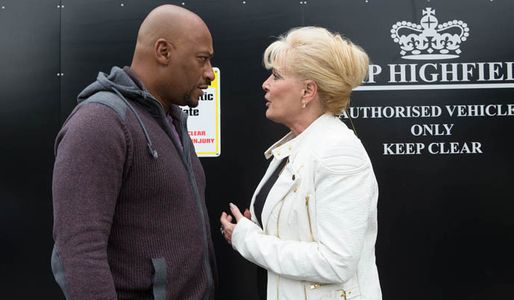