In an attempt to build bridges Todd offers to take Eileen, Jason and Eva out for dinner. At first Eileen refuses but when Roy tells her about Todd’s heroic efforts she agrees to cut him some slack and meet for dinner. Todd’s pleased and arriving at the bistro he orders champagne. But when Jason warns Eileen that she shouldn’t believe a word Todd says as he’ll only break her heart again, Eileen does a u-turn. Downbeat Todd walks alone in a darkened side street, where he’s set upon and mugged by a bunch of youths.

After a sleepless night, Tracy feels terrible. But has she said goodbye to her own daughter or the man she loves?

After a successful parents’ evening Anna and Tim are proud of Faye. Having agreed to run the school Christmas auction, Tim’s secretly fearful, knowing he’ll be required to read from a script.

Izzy, Katy, Alya, Beth and Kirk attend Yasmeen’s first aid course. Yasmeen introduces Mark, the first aider, and the girls are instantly smitten. The course over, Katy makes out she has some questions. She’s thrilled when Mark suggests he answers them over a drink.

As Todd lies battered and semi-conscious, a passer-by calls an ambulance. The police contact Eileen and Jason, explaining he’s in hospital after suffering a vicious assault. Eileen and Jason are horrified at Todd’s injuries. Wracked with guilt and blaming herself for abandoning him, Eileen tells Todd how sorry she is for letting him down.

Cilla cooks a lovely meal for Fiz, Tyrone, Chesney, Sinead, Beth and Kirk. Chesney thaws towards his mum and invites her to stay with them at No.5.

Tim confesses to Anna he’s illiterate and has to find a way of getting out of the school auction. Anna offers to help him learn to read and gives him a sympathetic hug. Sally watches, intrigued. When she quizzes Tim about his hug with Anna how will Tim explain?

In the bistro, Mark regales Katy with heroic tales of his time as a paramedic. Katy’s enthralled, but is she interested in Mark or his job? 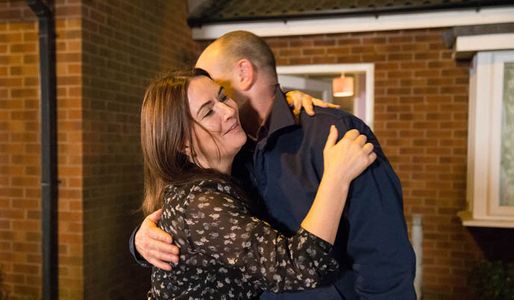