Coronation Street 07/12 – Desperate Kylie is caught in the act

In the salon, David and Maria work on Max, Liam and Lily’s hair in preparation for the family photo. In her jittery state, Kylie drops her last wrap. Making out she’s got a nail appointment elsewhere, Kylie heads out to find Callum, desperate for a fix. When David confides in Eva how worried he is about Kylie, Eva agrees to take David to Kylie’s old haunt the Dog & Gun. As David and Eva enter they watch, horrified, as Kylie buys drugs from a dealer. David follows Kylie into the loos and catches her red-handed about to take some speed. Angry and disgusted, David storms out. Eva’s furious with Kylie and implores her to go after David and save her family. Forced to choose between drugs and her family, Kylie’s at breaking point!

It’s family day at the community centre and a photographer has been booked to take family portraits. As Michael insists the photographer takes a shot of him and Gavin, Gavin reluctantly agrees. But Zeedan refuses to take part, claiming he’s too upset as today would have been his Mum’s birthday. Kal’s not happy and when Tony then forces him to work, Kal lays into Tony, furious that he’s exploiting Zeedan when he should be with his family.

When Maria accidentally stabs herself in the eye with a mascara wand, Luke leaps to her rescue and takes her to A&E.

Tim worries that he’s going to have to let Faye down and pull out of the school auction as his reading just isn’t up to it. When Emily introduces her new vicar to Sean and Eileen, Sean’s pleased it’s Billy, the guy he met in the bar. When Gary arranges to accompany Izzy and Jake on a trip into town, Katy confides in Alya that she reckons Gary and Izzy are getting back together. Alya’s gutted.

When Owen unwittingly lets slip to Diane that Kevin gave her sofa to Sally, Diane insists she and Kevin pay Sally a visit after their lunch date. Is Kevin’s lie about to be exposed? 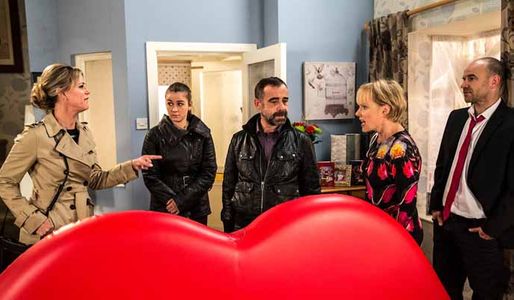