To Phelan and Vinny’s annoyance, Eileen insists she wants to be heavily involved in their building project having invested Jason’s money in it.Meanwhile Todd calls at the vicarage and tells Billy how sorry he is for ruining their evening. Billy kisses him passionately and leads him upstairs. With the intention of keeping Eileen out of the way, Phelan tells her he’d like to make her Concepts Executive which will mean travelling to various design shows. Eileen’s flattered, whilst Todd’s scathing. Eileen tears a strip off Todd and tells him that if can’t be civil to Phelan he can find somewhere else to live. Todd returns to Billy’s saying he can’t stand by and watch Phelan ripping his family off any longer. Will Billy agree to letting him stay at the vicarage?

Sarah apologises to Gary and explains that she’s spoken to Bethany and would be grateful if he would accompany her to the meeting at school. At the meeting, Lauren shows the Head Teacher the bruise on her arm and makes out that she’s the victim and Bethany’s the bully. Sarah’s incensed. The Head calls for order, announcing he’s suspending both Lauren and Bethany. As Sarah thanks Gary for his support, Gary voices his concerns aboutBethany’s gym routine and suggests she might be pushing herself too hard.

Having received a text from Sally inviting she and Kirk to a mediation session with Craig, Beth’s hopeful for a reconciliation. With Sally acting as mediator, Craig tells Beth how much he loves her but how hurt he is that she lied to him about his Dad. Will Beth understand his grievance?

When Gemma moans about her lousy job, Dev lifts her spirits by promoting her toAssistant Manager. Gail confides in Audrey that she found David’s blood stained hoodie under his pillow and she’s worried he’s not coping as well as they thought.​​​ 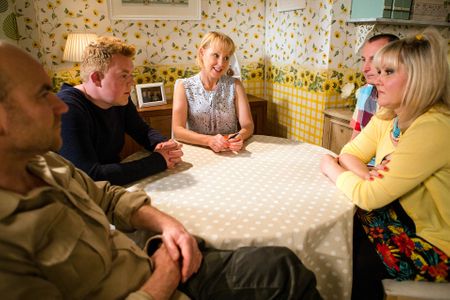