Ken wants to take Simon to visit Peter in prison, convinced it will give him something to fight for. Desperate to stop this Rob invites Simon to the zoo with Tracy and Amy. How will Peter react when Ken arrives for visiting time alone?

When Neil turns up in the cab office and tells Lloyd that Andrea’s disappeared without a trace Lloyd is worried. Steve and Jenna beg him to forget about her but will Lloyd be drawn back to Andrea?

After their failure at making soap, Chesney and Sinead attempt a range of bath bombs which Beth and Kirk put to the test.
​
Elsewhere, scheming Tony and Todd conspire to buy cheap building materials for Tyrone’s loft conversion.

Peter’s cellmate reveals there’s an inmate known as the Landlord who illegally sells alcohol to the prisoners. Peter pays him a visit and is shocked to discover the Landlord is none other than Jim McDonald! Meanwhile Ken tells Rob he’s hired a new solicitor for Peter, as he’s determined to find the real murderer, Rob’s unnerved.

Lloyd meets Andrea where she tells him she’s left Neil for good and has been sleeping on a friend’s sofa. It’s evident there’s still a spark between them, but will Lloyd succumb to her charms and agree to take Andrea back?
​
Kirk rushes Beth to the doctors after she suffers an allergic reaction to the bath bomb. It’s easily treated but Kirk confides in Chesney that Beth’s health scare has made him realise how much he loves her and wants to marry her. 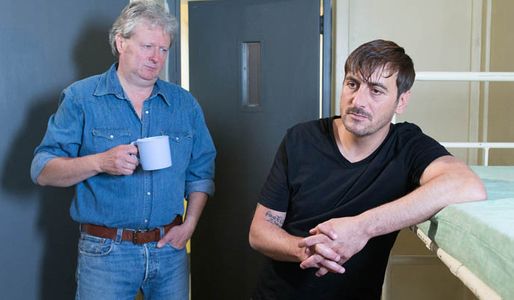