When Leanne tells Nick that Toyah’s invited them to Liverpool for Christmas, Nick happily agrees, knowing Peter will be disappointed. Feeling guilty for taking his son away at Christmas, Leanne offers to take Peter shopping for Simon’s present. Nick’s alarmed to learn that both Leanne and Peter are out Christmas shopping and fears they are together. Their shopping complete, Leanne and Peter find the car has been clamped in the car park. As they await release, they chat easily and listen to the radio, Leanne admitting a childhood obsession with Bros. As talk turns to their own history, Peter and Leanne have clearly put the bad times behind them...but could it be there is something more there than just nostalgia?

Yasmeen’s irritated by Nessa’s brazenness and berates Nessa for her affair with Cathy’s husband. As the women square up and Roy gets agitated, Cathy calls a halt to the row. Hearing Nessa bragging about being a magnet for men, Cathy finally unleashes her fury at her sister for her affair with Alan. Nessa’s stunned as Cathy throws her out. Cathy tells Roy she’s sure to fail him as a wife, like she did Alan, and suggests they should call off the wedding. Could this be the answer Roy needs or can he comfort Cathy when she needs him most?

Billy prepares to return to the Church. Todd admits he’d prefer him to have a normal job but has accepted his decision as Billy is pensive. However Billy informs the Bishop that his heart no longer lies with the Church, as he wants to put his relationship first. The Bishop’s shocked when Billy quits his job but has he made the right decision?

Mary tries to avoid Norris but he tracks her down. Not wishing to discuss her past, Mary orders Norris to forget she ever mentioned it. In the face of Norris’ pestering, Mary insists she made peace with what she did many years ago but is Mary being truthful? 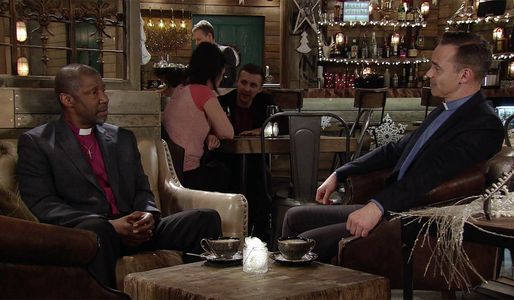