Eva beseeches Kylie to tell David the full extent of her past drug addiction so he can help her, threatening that if Kylie doesn’t come clean to David she’ll tell him all. At breaking point, Kylie admits to David she tried all sorts of drugs before she met him but now she’s turned her life around and hates herself for what she’s done. Horrified how will David react to her confession?

Zeedan berates Kal for threatening Tony, pointing out he could have lost him his job. Kal assures Zeedan he was only looking out for him. Reminding Zeedan that he hasn’t forgot his mum, and will always love Jamila, can father and son reach a truce? Meanwhile when Alya confides in Leanne that Katy reckons Gary and Izzy are getting back together, Leanne suggests it’s just wishful thinking from Katy and it’s time Alya and Gary came clean about their relationship. Gary assures Alya he has no intention of getting back with Izzy but how will he react when Alya says she’s decided to tell Kal about them?

Maria feels guilty realising Luke missed out on the flat he was after as he had to take her to A&E. When Audrey advises Maria not to let Luke slip through her fingers as he’s a lovely boy, Maria apologises to Luke and suggests they go on a date.

As Sally surveys the deck chairs that are now in place of her sofa she blames Tim for the fact she’s not only lost her lovely sofa but her new friend Diane too. Sean’s nervous as he and Billy have their first date at the bistro, will they be making plans for another date by the end of the night? 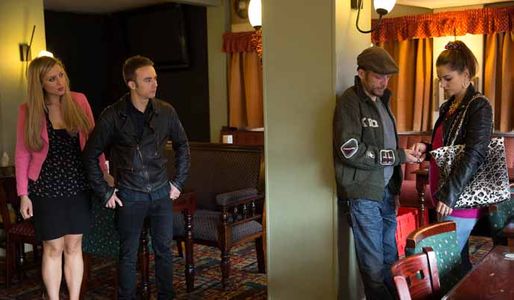