Having returned from his morning run, a smugNick spies Robert outside the bistro looking dishevelled and clearly the worse for wear. As Andy, Steph and Zeedan prepare for lunchtime, they discuss the situation with Robert and how he’s hit the bottle and seems unable to cope. Picking up a tray of burnt canapés, Robert orders Zeedan to do them again. Zeedan quits his job and storms out. Nick takes Leanne to look at some new restaurant premises. She’s horrified to discover Nick’s planning to set up right next door to the bistro. WhenNick then enjoys telling Robert of his plans to put him out of business, Leanne despairs.

Jason phones Todd from Thailand and tells him that Phelan has come up with a great investment opportunity for him. Todd warns him to steer clear. Phelan calls atNo.4 and asks Sally if she can pull a few strings on the Planning Committee regarding his new development project. Spotting Sally’s partially built desk and shelves, Phelan offers to build them for her. Sally’s grateful and agrees to speak to her colleagues at the council. Spotting Phelan leaving No.4, Todd’s suspicious.

Determined to forge a career in the police force, Craig sets off to attend a Special Constable Information Day. Proud Beth sees him off. When Tracy muses that Amy could never join the police force because of her family’s criminal record, Beth visibly pales and Tracy realises she’s hit a nerve.

In the factory, Sinead suggests to Eva that she and Aidan should consider renting Carla’s flat. Jenny overhears giving her food for thought. Eva tentatively suggests to Aidan they should get a place of their own and Carla’s flat would be perfect but Aidan reckons it’s too soon to move in together. Meanwhile when Johnny suggests they could work late together, Jenny points out that a man in his position should have his own place and he should consider renting Carla’s flat.

As Robert pulls up in his van, a police car pulls up behind him. The officer explains they’ve had a tip off and suspect him of drink driving. Craig chats to the officers and explains how he intends to join the force. Having failed the breathalyser, Robert is arrested and driven away. Nick watches with glee while Andy and Steph realise they have no choice but to close the bistro. Under Steph’s glare, Nick admits he reported Robert to the police. Robert returns and pouring himself a whisky, tells Steph and Andy he’s looking at a fine and a 12-month ban. WhenRobert wrongly assumes Zeedan to have dobbed him in, Steph is forced to admit it was actually Nick.Meanwhile Nick admits to Leanne that although he wants revenge on Robert, he’s deadly serious about his new business and wants her to be a part of it. But they’re interrupted by a furious Robert who rails at Nick for shopping him to the police. How will Leanne react to his revelation?

Having overheard Sally talking about Phelan’s development proposal, Todd wades in and warns her to make sure it’s water tight as she wouldn’t want any dodgy deals to backfire on the council. Sally’s grateful for his advice. When Sally underlines the need for total transparency, Phelan masks his irritation realising this is down to Todd’s interference.

Johnny tells Aidan his plans to rent Carla’s flat. Aidan confides in Johnny how he’s planning a surprise mini break for Eva. Kirk takes a message from an estate agent saying that Mr Connor can pick up the keys to his new flat. Assuming them to mean Aidan, Kirk passes the message onto Eva who’s thrilled. Johnny reveals to Jenny he’s put the wheels in motion to provide them with their own little love nest. Jenny’s delighted.​​​​​​​ 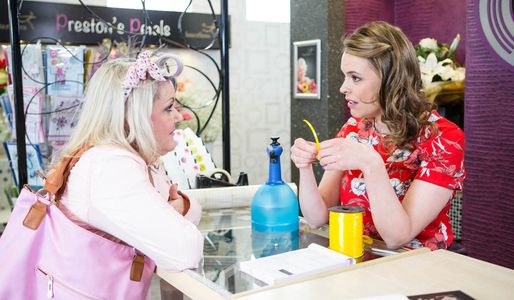