Coronation Street 09/01 – Will Beth and Kirk hitch without a glitch?

Kirk’s a nervous wreck as he and Chesney prepare for the 80s themed wedding. Whilst Chesney’s back is turned, Kirk slips out unnoticed. As Beth waits at the registry office (dressed as Madonna with her Banarama bridesmaids), Chesney searches in vain for Kirk. Is Kirk about to stand up the love of his life or will he don his Adam Ant costume and say I do?

Unable to cope, Steve tells everyone to help themselves to drinks and heads into the back. How will Liz react when she arrives home to find the wedding guests behind the bar helping themselves?

Mary muscles in on Julie’s wedding cake plans and takes over with her icing bag. When Sean then admires the 80s themed cake, Mary takes the credit whilst Julie fumes.

Sean’s upset when Billy fails to turn up for the wedding.

Has Kirk overcome his pre wedding nerves and tied the knot with Beth? Meanwhile Maria’s annoyed to see Luke at the reception and ignores him. Realising he’s not wanted, Luke downs his drinks and leaves. Maria catches up with him on the street and apologises for her behaviour. In an attempt to make it up to him, Maria invites Luke back to her flat, will Luke soften?

Liz and Tony drag the guests out from behind the bar in an attempt to restore order. Liz demands to know what’s going on but unable to deal with the situation, Steve pushes past her. As Michelle enjoys a second date with Hamish in the bistro, Liz arrives begging Michelle to help with Steve, explaining she’s worried about him. Michelle’s torn and at a loss for what to do, Liz tells Steve he’s coming with her to Spain so she can keep an eye on him. Will Steve agree?

To Sinead’s embarrassment, Arlene flirts outrageously with Dev until Julie loses her temper and warns her off her boyfriend.

Billy arrives and apologises to Sean, explaining he had a work crisis. Will Sean accept his apology? 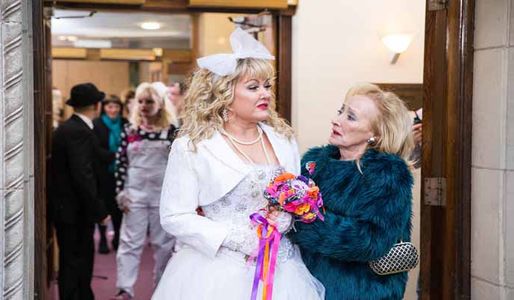