Audrey helps jittery Gail prepare for her wedding as Steph and Leanne make preparations for the reception. Nick arrives late and flustered, clearly having had a good night with Erica. Meanwhile Andy’s a bag of nerves, feeling guilty about the fake mugging. Gavin clocks Michael and Andy dressed for the service. Michael proudly explains that his son is his best man. Gavin’s scathing and tells Michael that if he were his son, he’d despise him and never forgive him. Awash with guilt Andy escorts Michael to the Registry Office where Nick does his best to calm him but as Gail prepares to leave for her wedding, Gavin knocks on the door, introducing himself as Gavin, Michael’s real son. Gail reels.

While Owen baby-sits Jake and Joseph, Linda calls round hoping to spend some time with her grandchildren before heading back to Portugal. Anna’s jealous and it seems she has a right to be when Linda confesses to Owen that she’s always loved him and deeply regrets her affair. But when she suggests to Owen that he and the girls should move abroad with her and give their relationship another try, how will Owen react?

At Julie’s request, Leanne tries to fix the deep fat fryer in the kebab shop but only succeeds in fusing the lights.

Eileen refuses to step foot in the Rovers until she’s had an apology from Steve and Michelle. Feeling low, Eileen lets Todd persuade her into joining an internet dating site. Emily makes it plain she’s not keen on helping Billy with the Church Comedy Night . Sean secretly wonders if Emily disapproves of Billy’s sexuality.

Gail’s stunned as Gavin shows her his passport and driving licence, proving that he’s the real Gavin Rodwell. At the Registry Office, Michael and Andy become increasingly nervous as they wait for Gail, with an upset Michael convinced she’s changed her mind. Meanwhile Gavin explains to Gail how Andy staged the mugging to pay him off and buy his silence but he was £2,500 short. Declaring how much he hates his Dad for abandoning him, Gavin threatens to tell Michael the truth. Gail implores him not to, knowing the shock could kill Michael. Gavin tells Gail he’ll keep quiet in return for the £2,500. Horrified will Gail agree? With Gavin gone Gail races to the registry office, will she make it to her wedding on time?

Will Owen accept Linda’s offer and leave his life in Weatherfield with Anna behind? After hearing about Linda’s proposal Anna’s in turmoil and when Linda comes in the pub to make a further shocking announcement both Anna and Owen are left reeling.

With no electricity in the kebab shop or the flat above, Kal insists Leanne and Simon must stay at No.6 with him. Zeedan makes it clear they’re not welcome.

Todd writes a profile for Eileen, bigging her up and lying about her age. Eileen’s impressed and eagerly posts it on the dating site. Julie’s gutted to learn that Dev’s uncle has died and Dev will be staying in India longer than he first intended. 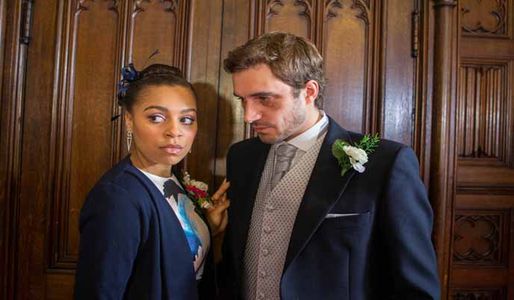