On the eve of his wedding to Stella, Karl's a nervous wreck, fearing it's only a matter of time before Craig reveals his secret - especially as the group Craig’s wrongly accused of bullying him are now on his back.

Meanwhile, Dev tries to speak to Beth about Craig's letter as Jason questions those who were at the Full Monty night about Karl's movements that evening.

Karl tells Stella he's booked a honeymoon in Spain - but Jason tells him if he's got anything to do with it there won't be a wedding at all.

Elsewhere, a fragile Hayley returns home - but top of her bucket list is to teach Roy to drive.

Also, Sally revels in the attention when she's questioned about her love life after a night of passion with Tim.

Stella's unnerved by Karl's behaviour as he's dragged away from Craig's 'school bullies' after losing his temper. He lies to Stella and blames pre-wedding nerves, but will her hen do take her mind off it all?

At the Rovers, Jason and Dev pour over photos of the Full Monty night, realising he went missing in the middle. Jason confronts Karl outright and accuses him of setting fire to the pub.

Elsewhere, Hayley enjoys catching up on what she's missed, though she's clearly exhausted. Nonetheless, she tells Roy not to pussyfoot around her.

Also, Sally comes down to Earth with a bump when Tim tells her he just wants a bit of fun. 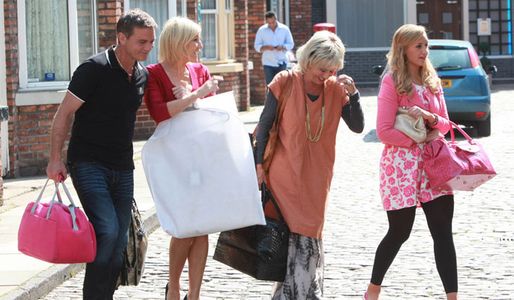