Cathy wakes to find Roy cancelling the church. Disappointed, she hints at a change of heart but Roy doesn’t take the bait. Cathy’s aghast to realise that Roy’s rash has vanished and assumes he’s relieved. Roy cancels the flowers and the reception, and calls on Ken and Anna to explain that the wedding is off. Anna’s secretly relieved she won’t have to leave the flat. Alex is annoyed at Nessa for causing chaos. Unrepentant Nessa blames Roy for going back on his promise to Cathy. Roy listens, his conscience pricked. Sensing Cathy’s regret, Roy points out it was she who called off the wedding. Exasperated Cathy explains she was merely seeking comfort from him. The misunderstanding aired will Roy decide the wedding must go ahead after all?

Seeing Nick’s paranoia, Robert urges him to confront Peter to warn him off Leanne. Leanne and Peter arrange to throw an early Christmas Day celebration so that Peter can see Simon open his presents. Nick visits No.1 and tells Peter to stay away from Leanne.

Eileen’s upset by the letters flooding in from angry customers, out of pocket due to the development scam. Meanwhile Andy’s enraged as he watches Phelan cheerily going about his business.

Steph takes charge and leads Roy out of the Bistro where she manages to calm him down. Tyrone’s alarmed to see Roy in such distress and confiding in Brian about Roy’s panic attack they agree to take action. Meanwhile, in the café, Cathy practises her wedding vows using a dictaphone. When Nessa returns, Cathy agrees to let bygones be bygones, not wanting any further trouble ahead of her big day. Brian and Tyrone corner Roy and demand to know if he had a panic attack because he’s feeling trapped by the wedding. Brian and Tyrone follow Roy up to his flat where, faced with their badgering, he finally admits he doesn’t want to get married but won’t break his promise to Cathy. In despair, Brian and Tyrone hit Roy with some home truths but is it too little too late?

Nick accuses Peter of sniffing around Leanne. Peter’s bemused but when Nick calls him a jobless alcoholic and mocks him for dossing at his dad’s, Peter’s stung. His mind whirling, Peter puts together a plan to prove Nick wrong but he knows it will ruffle a few feathers...

Eileen assures a frosty Rita that Phelan’s working really hard to pay back everyone’s money. Meanwhile, another letter arrives at No.11 - what will Eileen do?

Todd has no luck finding a job but Billy suggests they go out on the lash while they still can. As they get merry at the Rovers, Billy’s delighted by a call offering him a job interview.​​​​​​ 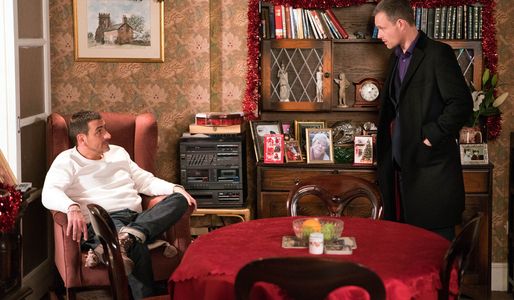