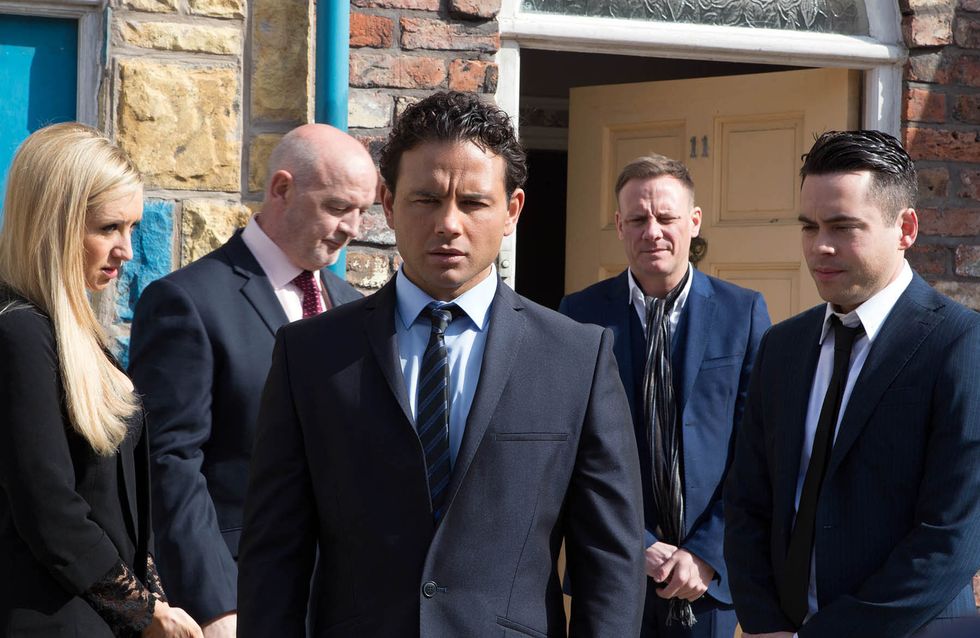 Having spent the night with Gemma, Jason makes it clear she’s not welcome. Gemma leaves feeling hurt. As the Grimshaws pile into the funeral cars, there is tension between Eileen and Jason who tells her to stay away from the funeral. Todd gently suggests this maybe a good idea. As the mourners gather outside the church, Todd clocks Billy handing some cash toLee. Billy makes out he was just helping a parishioner. Gemma convinces Eileen she should b eallowed to say her goodbyes to Tony. Meanwhile, Erica tells Steve she has heard from Liz who has arrived safely in Spain. Billy conducts Tony’s funeral. With some encouragement from Todd, Jason stands up to deliver a few words. As Jason delivers his eulogy, Eileen enters at the back of the church. Incensed, Jason demands that she leave.

Behind Cathy’s back, Alex sneaks his mates up to the café flat.Roy arrives back from Sylvia’s and Cathy’s delighted to see him but Roy’s perturbed to see a new coffee machine in situ. Having heard a crash from the flat, Roy and Cathy head up to investigate.They’re appalled to find Alex and his drunken mates having a party. When one of the lads breaks an ornament, Roy loses his temper and throws them out.

Wearing his best shirt, Craig sets off for the bistro with Caitlin but Caitlin doesn’t seem particularly keen and Sinead’s quietly concerned for Craig. Chesney skypes Sinead from Portugal where he’s having a wonderful time with Joseph. Sinead does her best to mask her sadness.

Jason is still furious with his mum as the funeral starts. Billy does his best to defuse the situation while Eileen heads out upset. As the mourners gather round Tony’s graveside, Phelan leads Jason away in an attempt to calm him down. Todd watches Phelan, annoyed.Eileen and Jason have a heart to heart by Tony’s grave. Phelan approaches and assures Jason that with his dad gone, he can always look to him for support.

​Cathy and Alex offer to clean up the mess but Roy rounds on them telling them it’s obvious their living arrangement isn’t working. Cathy’s horrified to discover from Carla that it’s Hayley’s birthday. Carla finds Roy on Maxine’s bench, clearly upset. Roy tells her about his spat with Cathy. Carla implores him to make it up with her. Roy returns home to find Cathy and Alex, bags packed, about to leave. He apologises for his earlier outburst but can Cathy stay with him now?

While Gail makes preparations for Carla’s party, Sarah confides in Kylie that she can’t bear to be in the same house as Callum’s body and can’t stop thinking about him. Gail gets the wrong end of the stick completely and thinks Sarah must have a new boyfriend. Todd quizzes Billy about the young lad he gave the cash to but Billy refuses to be drawn.Chesney skypes Sinead and suggests they have a romantic meal on Friday via video link. Sinead’s pleased. Craig returns home upset and confused, telling Sinead his dinner didn’t go well. 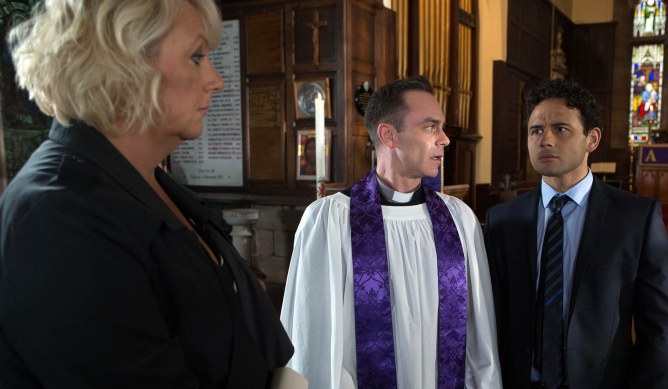