Detecting a frosty atmosphere between Cathy and Roy, Tyrone offers to drive Alex to Scotland. Cathy confides in Fiz about Alan being Alex’s father and admits she’s struggled to accept Alex since she discovered the truth. But when Roy’s Woody breaks down on the way to Inverness and Kevin is called out to rescue them, Cathy realises she’s made a mistake and seizes the opportunity to go with him and bring Roy and Alex home.

Eileen is gutted when she witnesses Billy refusing to give Todd the time of day. When Eileen makes an attempt to get Billy to forgive Todd for what he’s done, Billy warns Eileen that Todd has a hatred for Phelan and that she should be mindful of the mess she could be getting herself mixed up in. Will Eileen take heed of his advice?

Kirk visits Maria at home and tells her that a close family member is very unwell hasn’t got long left to live. Maria and Kirk are devastated by this shock news.

Sharif’s plan to get his hands on the money he needs has succeeded and he hands over a cheque to Alya. But where has this money come from and will Sharif have landed himself in even more hot water? Elsewhere Erica tricks Aadi and Asha into admitting to Dev where they’ve really been getting their flowers from. How will Dev react? ​​​ 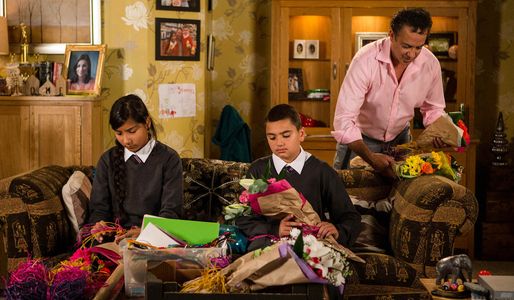