Gail’s shaken when Susan phones, revealing she’s sent Michael a photo album documenting Gavin’s life. Gail and Andy vow to intercept the parcel before Michael can see it. But when they miss the parcel and it ends up in Norris’ hands it looks like they’re in trouble. Norris refuses to hand it over as it’s addressed to Michael so when Michael returns to No.8 clutching his parcel, Gail and Andy are beside themselves. Michael’s touched by Susan’s thoughtfulness with the album. As he coos over baby pictures of Gavin, Gail and Andy are filled with dread, certain the game’s up. As he turns the pages will Michael realise he’s looking at pictures of a different man?

Jenny’s edgy, knowing she’s on borrowed time. With the Websters distracted by the aftermath of the fire, Jenny packs two bags and books a taxi to Hull for her and Jack. Will she make her getaway?

Eileen’s disgusted that Tony’s disappeared and not even bothered trying to contact Liz. Jason attempts to defend his dad but will it fall on deaf ears?

Julie and Mary look forward to welcoming Dev home from India but how will he react to news of the fire? David prepares for a home visit from a Cafcass representative, Kylie’s reappearance not far from his thoughts.

As Andy is forced to reveal his real name, and that he was Gavin’s flatmate, Michael reels. Andy burns with shame as he explains how he came to pose as Gavin. Michael’s stunned when Gail admits that she was in on the deception. Gail blusters that she feared the truth would give Michael a heart attack, but he’s furious that she’s been lying to him. As David shows the Cafcass officer into No.8, they’re stunned to walk into a bitter row between Michael, Gail and Andy. The Cafcass officer beats a hasty retreat and David’s furious. Matters go from bad to worse when Gail’s forced to divulge that the real Gavin is dead. As Andy implores Michael to believe he looks on him as his father, how will Michael react? Can he forgive their betrayal or will Michael turn his back on Gail and Andy?

Struggling with the weight of her guilt, Jenny realises she can’t stick around and offers to take Jack away for a few days so that Kevin can focus on his family in the aftermath of the fire. Will Kevin unwittingly agree to Jenny leaving with his son?

Julie is perturbed by Dev’s distant demeanour. Meanwhile Mary’s intrigued when she takes a call on Dev’s mobile from a woman named Talisa. Dev assures her they’re just friends who met during the charity project but Mary’s unconvinced. 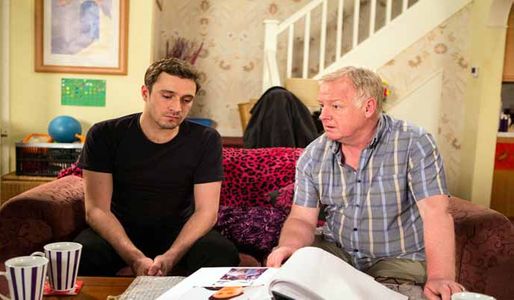