GHOST Jason accosts Sarah in the street, demanding to know whatDavid’s playing at. In the café, Todd gently suggests to Sarah that David’s trying to frame Jason to throw the police off his own trail. Feeling the pressure, Sarah storms out and is aghast at the sight of a man that appears to be Callum. Todd corners Billy in the pub and fishes for information on Sarah.When Billy hints that Callum may have physically threatened Sarah, Todd surmises that David acted to save her. Billy refuses to indulge in such speculation. Todd calls on Sarah to probe her about Callum but is thrown when Sarah asks if he believes in ghosts. Todd’s astonished when Sarah suddenly flips.

Chesney apologises to Sinead for leaving her in the lurch yesterday. Riddled with guilt, Sinead tells him she was out drinking all night with Fiz. At the factory, Sinead sheepishly apologises to Aidan for her clumsy pass. Eva clocks the exchange and pushes Aidan for an explanation. Chesney’s suspicious when Fiz lets slip that she wasn’t with Sinead all night. As Aidan and Chesney make polite conversation in the Rovers, Eva can hold her tongue no longer and blurts out that Sinead made a play for Aidan. Chesney’s devastated.

Roy and Cathy announce their engagement to a delighted Fiz and Anna. Roy presents Cathy with an engagement ring. Elsewhere Norris trains some binoculars on his roof. Phelan again offers to look at the slates but Norris rejects the idea of employing a murder suspect like Jason. Norris is intrigued when Alastair, a customer in the Kabin, mentions he’s in property and is currently seeking Edwardian-era roof slates to restore a period building. Norris realises he could make a tidy profit and phones Alastair to strike the deal.​ 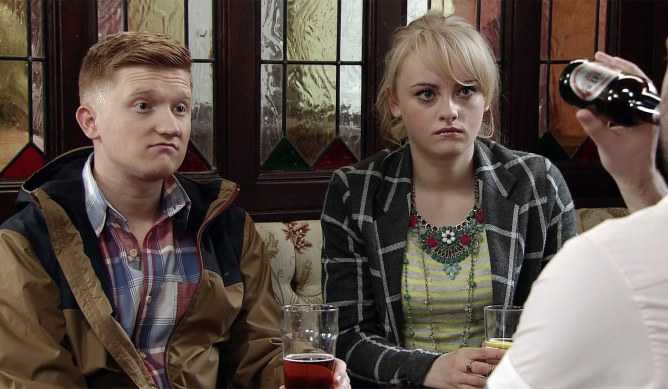