Gary's furious as Phelan continues to smugly goad him and thanks him for beating him up – boasting that its been the best profit of his life. But when Phelan takes it too far, will Gary be able to keep it together?

Tina tells Steph that her ‘friend’ who’s having an affair told the guy that she loves him, but he didn’t say it back. Steph tells her she knows she’s talking about herself. Meanwhile, Carla thinks she may be pregnant.

Sophie tells Maddie she’s going to come home with her as she can’t be alone with a broken wrist. Can Tim persuade Sally to let her stay?

Elsewhere, Jason calls Tony and asks for his help when Dev is obviously unimpressed with his lack of progress.

Gary is overcome with anger at Phelan but Owen warns him that if he loses his temper he’ll end up in prison. They feel a small sense of success when Owen reveals the bill he gave Phelan was fake, and they’re drinking pinks with Phelan’s money, but will it be ruined when Phelan arrives telling them he’s bringing the deadline closer?

Peter watches Steph and Tina nervously across the bar. He corners Tina later and demands to know what she’s told Steph, but Tina lies and denies Steph knows anything. Peter’s relieved, telling Tina he loves her. Tina’s delighted, but has Peter only said it just to keep her on his side?

Maddie tries to settle into No.4, but Sally is suspicious of her and makes a point of taking her handbag upstairs. When Maddie tries to kiss Sophie, what will happen?
​
Elsewhere, Eva pressures Jason into thanking Tony for his help. Roy arrives home with a large parcel but ignores Fiz when she asks what it is. 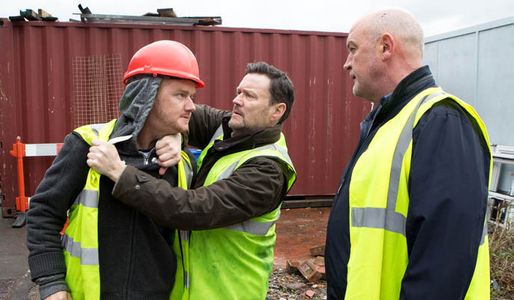