When Tim discovers that Sally’s reactivated her social media accounts, he’s furious, worried she’s putting herself in danger. Having received a text telling her to look at the Gazette, Sally’s horrified to read her own obituary. In front of the factory girls Sally masks her fears, but when she receives some threatening texts, her façade crumbles. Back at home the journalist from the Cheshire Haven arrives. As Tim heads to the pub, keen to avoid any publicity, Sally opens a parcel she’s been sent and is horrified at its contents.

As Toyah and Peter prepare to head to the clinic for her egg harvesting, they’re interrupted by the police who arrest Peter on an assault charge. Worried that she’s going to miss her appointment, Toyah asks Leanne to accompany her. The police interview Peter and reveal that Chloe has made a statement saying he assaulted her the night before Ken was pushed down the stairs and is happy to testify in court. Can Peter prove she’s lying?

In the café, Maria spots Aidan and in a bid to wind him up, cosies up to David. How will Aidan respond? Meanwhile David continues to wind Gail up and tells her Maria’s pregnant and they’re getting engaged. Gail’s stunned.

With bankruptcy looming, Anna sorts out some old clothes to sell. Craig talks to Bethany about what he’s dealing with training as a Special.

At the factory Sally sobs as she reviews the contents of the parcel. When she fails to turn up for her interview, Sophie and Tim set off in search of Sally. Finding her alone in the factory, Sally breaks down in Tim’s arms, revealing all the vile messages she’s received, her obituary in the paper and now the parcel. Tim’s horrified and swears he’ll find the perpetrator and have his revenge. At Tim’s insistence, Sally closes down all her social media accounts but how will she react when he suggests she step down from the council too?

The police produce Simon’s phone and play the incriminating message to Peter suggesting he planned to do a runner after trying to kill Ken. Peter insists he didn’t lay a finger on Ken and intends to prove it. As he rushes to the IVF clinic, Peter reveals to Toyah how Chloe is trying to frame him for the attack on Ken.

Having clocked the tension between Aidan and Maria, David’s intrigued. Maria admits they had an affair but he refused to leave Eva for her. When Gail tells Audrey about Maria’s pregnancy, Audrey reveals it’s a wind up. Gail resolves to get even.

Bethany apologises to Nathan for overreacting and begs him to give her another chance. Will Nathan agree? Aware of Kevin’s financial woes, Freddie announces he’s thinking of retiring.​​​​​​​ 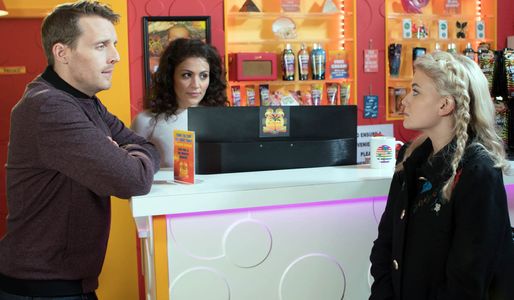