Kylie persuades David her plan to nail Callum and show Sarah his true colours is their only hope. David reluctantly agrees. Spotting Callum across the street, David and Kylie put their plan into action and stage a huge row for his benefit. Finding Callum, Kylie goes all out to convince him how unhappy she is with David and how she wishes she’d taken him up on his offer. Callum falls for her act and leads her through to the back room of the Dog & Gun. David searches in vain for Sarah, realising that time is running out. Pulling Kylie towards the sofa, Callum tells her he wants her. Wondering where on earth David has got to, Kylie tries to conceal her mounting panic.

In the factory, Carla gambles the hours away playing online poker and orders a confused Sally to cancel her meeting with the accountant. Carla later invites Nick, Erica and Lloyd for a game of poker in the café.

Ken pushes Bev as to why Deirdre stayed away so long. Bev admits that Deirdre couldn’t face coming back to the street as she was too ashamed when she found out about Tracy’s affair with Tony, knowing how much her daughter had hurt her friend. Oblivious to the tension, Tracy discusses Deirdre’s funeral arrangements whilst Ken seethes.

Cathy proudly shows Roy how she’s shifted some junk so they can actually sit down.
Roy’s impressed until he spots the junk now stacked up in a different corner. Suggesting how useful it would be if Roy could drive as they could take rubbish to the tip, Cathy puts pressure on Roy to re-book his driving test.

When Sarah arrives back in a cab, David jumps in, ordering the driver to take them to the Dog & Gun. As Callum gets heavy Kylie tries to play for time but suspecting he’s been duped, Callum grabs Kylie and demands to know what’s going on. Realising he’s been stitched up, Callum throws Kylie on the sofa and yanks her top up. Scared he’s going to rape her, will a terrified Kylie be able to defend herself? As David and Sarah arrive Callum’s in a compromising position, can he spin a tale to explain his actions or is it all over for Callum and Sarah?

The poker game takes a more serious turn as Carla ups the stakes then starts losing money hand over fist. Nick begs Carla to quit the poker game as she’s losing a fortune but Carla doesn’t care, riding high on adrenalin. How will Roy react when he arrives back in the café to find Carla running a poker school?

Reckoning they’ve done enough junk clearing for one day, Cathy insists on taking Roy for a drink in the bistro. But Roy becomes uneasy when Yasmeen suggests he and Cathy are more than just friends.

Liz takes Dan and his daughter to the bistro for dinner. Leanne smiles at them through gritted teeth. Billy calls at No.1 offering his condolences and explaining he’ll be conducting Deirdre’s funeral. Tracy unearths a tin in which Deirdre kept her personal effects. In it she discovers a letter from Deirdre describing the kind of funeral she would like. Ken remains quietly bitter towards Tracy. 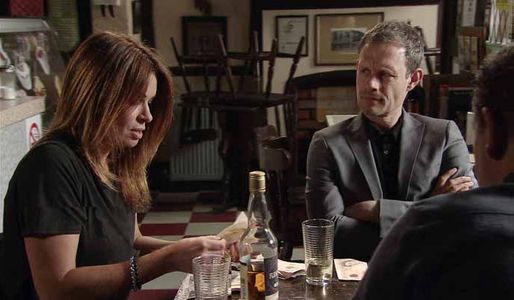