Coronation Street 10/10 - Steve And Michelle Get Some Devastating News

Michelle and Steve attend their first scan however it’s obvious that something is playing on Steve’s mind. Clearly distraught, he breaks the news to Michelle that he had a call from Jim to tell him he’s got Myotonic Dystrophy - it’s genetic and both he and their baby are at risk. The news is a blow to Michelle and the couple quiz Rana about how MD could affect their baby. But Michelle isn’t the only woman pregnant with Steve’s child...

Noticing a spring in her Mum’s step, Bethany wonders if she’s got a new boyfriend. Her suspicions prove to be correct when Sarah admits there is someone and when Bethany lets slip her mum’s words to Gary, he’s secretly thrilled. However Sarah’s earlier chirpy mood darkens when a shocking discovery leaves her seeing red.

Worried about David’s state of mind, Gail insists he should return to work as a bit of normality. Still consumed with revenge, David heads out of the hair salon, leaving a client mid-appointment. Audrey’s furious - but little does she know the true extent of what David’s got up his sleeve...

Desperate to get Eileen off his back, Phelan suggests she should return to her job at Street Cars. Eileen agrees but when she calls the cab office, she’s left reeling that Tim insists on a formal interview. Meanwhile, at Faye’s suggestion, Anna invites Izzy for tea. Izzy’s delighted when Faye offers to babysit for Jake at Izzy’s flat - does Faye have an ulterior motive?

Leanne does her best to hide her inner turmoil as an oblivious Michelle reveals there’s a 50% chance that Steve may have MD. Elsewhere, Steve breaks the news to Liz who is gobsmacked. Close to tears, Leanne tells Nick about Jim’s genetic condition and how their baby could be affected. Nick calls Steve to the flat where an apologetic but determined Nick and Leanne put pressure on Steve to find out his results as soon as possible. Losing his temper, will Steve comply with the pair’s requests?

Bethany breaks down, coming clean to Sarah about how, in desperation, she started taking diet pills even though Gary had warned her not to. Sarah’s horrified to realise Gary knew what was going on - will this throw their blossoming romance into dangerous territory?

As David heads out of the court building, he watches as a prison van pulls up, a plan forming in his mind. But Gail’s bemused to find a clearly upbeat David making the tea and playing word games with Max and Lily - has he got cold feet at the last minute?

Eileen attends a farcical interview with Tim, has she done enough to win her job back?Meanwhile, checking that Jake is asleep, Faye surreptitiously lets Seb, her boyfriend, into Izzy’s flat. Later, Anna and Kevin let themselves into Izzy’s flat - what will they find?​​​​​​​ 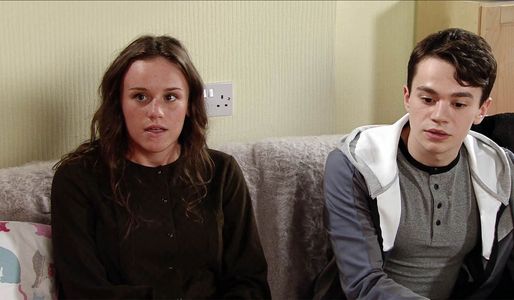