Simon’s contrite as he hands Eva a birthday card. Leanne can barely look at him. Eva urges Leanne to think carefully before reporting him to the police. Tom calls at the bistro and informs Leanne that Kyle’s leg injury is very serious and he may never play football again. Devastated, Leanne reaches a decision. With heavy heart, Leanne reports Simon to the police, listing all the occasions on which he’s abused her and explaining about the latest incident involving Kyle.


Anna calls in the garage and apologises to Kevin for her recent tantrums and suggests they wipe the slate clean. Kevin agrees and at his suggestion they join Tim and Sally for dinner. Sally bores Anna to death about her council campaign. Anna loses her temper and thrusting some cash at Kevin, stalks out of the bistro.

When Erica clocks Izzy struggling to carry some rolls of fabric, she offers to help, but aware Izzy won’t accept charity, she suggests in return Izzy teaches her to sew. Izzy agrees on condition it remains their secret.

Still sporting an itchy rash, Beth tells Nick he owes her a free meal. As Todd proudly shows off his first bouquet, Tracy’s scathing. Todd blames her mood on Robert’s fling with Carla. When Tracy suggests to Robert they could have an afternoon lie down, Robert not interested. Tracy’s hurt whilst Todd is amused. 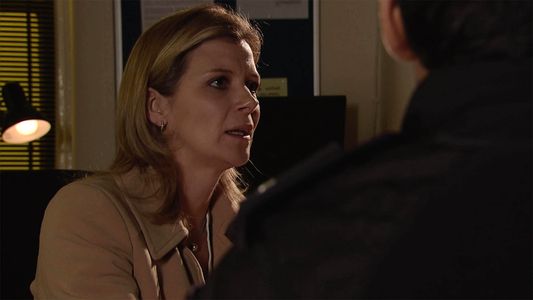