Leanne implores Nick to bury the hatchet with Robert and move on. Taking Leanne’s advice, Nick confronts Robert and tells him he’s ditching his plans to set up a rival restaurant and wants to call a truce. Robert’s taken aback and suggestsNick might like to buy back a share of the bistro. While the arch rivals haggle over percentage share, Steph summons Leanne, who wades into the argument and suggests they split the bistro 50/50. Nick and Robert finally agree on condition Leanne returns as their manager. As Nick and Leanne head home, Nick suggests they go on a proper date, but mindful of her condition will Leanne agree?

Johnny invites Kate, Aidan, Maria and Luke to his house-warming party.Aidan reminds him he’s taking Eva on a surprise mini break that evening, but promises they’ll call in for a quick drink. Aidan enigmatically tells Eva to meet him at Carla’s flat later and pack an overnight bag. Eva’s thrilled, convinced he’s going to ask her to move in. An excited Eva arrives at Carla’s flat with her suitcase. Aidan’s bemused as he explains it’s Johnny’s house-warming and he’s booked them a surprise mini break at a spa hotel. As the penny drops, how will a humiliated Eva react?

Having found his application form in Beth’s handbag, Craig demands some answers. Beth makes out she’s just overprotective and worried it’s a dangerous job. Suspicious Craig wonders if Beth has got some dark secret which is why she doesn’t want him to join the police force. Beth covers and insisting he has her full support, reluctantly posts the application form.

Gemma tells Dev she wants to improve herself and suggests she could become manage rat the kebab shop. Dev’s scornful but later shows Gemma an article about the ‘Good NeighbourScheme’, suggesting she should give it a shot. Sally meets up with Phelan and Vinny in the café to discuss the details of their planning application. When hungover Alex is slow with their order, Phelan’s quick to haul him over the coals. Sally’s horrified.​​​ 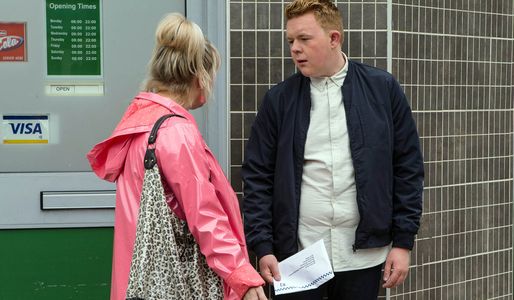 Coronation Street 10/08 - Tracy is forced to face the truth