Gail and Michael are at odds about her late appearance at the registry office, convinced she had a case of cold feet. Did the marriage go ahead and can Gail convince Michael of how much she loves him? Meanwhile Gavin lays down the law to Steph and Andy, telling them he wants his £2,500 by close of play tomorrow or he reveals all to Michael. Desperate to protect Michael from the truth, Gail tells Gavin she’ll get him the cash and in return she never wants to see him again.

Linda takes Izzy and Katy for lunch at the bistro and suggests they move to Portugal with her. The girls are touched but decline her offer. However when Katy has a spat with Callum over Max shoving Joseph, in which Callum turns on her and calls her a slapper, Katy has a change of heart and tells Owen that she’s decided to take Linda up on her offer and move to Portugal. How will he react?

Yasmeen and Sharif return to find Leanne and Simon staying at No.6. Leanne assures them it’ll only be a few nights whilst Tony fixes the wiring in the flat. But as the Nazirs tuck into Leanne’s casserole, they’re interrupted by a call, explaining that the flat needs a complete rewiring and she won’t be able to move back in for at least a week.

When Sean reminds Emily about the Church Comedy Night, Emily’s cutting leaving Sean and Billy bemused. Eileen pours over the responses to her dating profile, quite taken by one of her potential love interests. David berates Callum for keeping Max out longer than promised but Callum’s unfazed and points out that as Max’s real Dad, he’ll do what he likes. 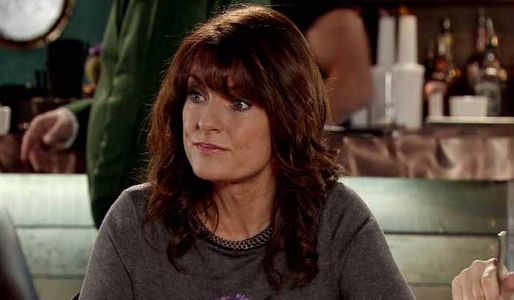