Exhausted, Sarah moans to David that Harry kept her awake all night with his crying. Bethany insists on taking Harry out and orders her mum to get some sleep. When Sarah asks Billy if he can squeeze Harry in for a Christening as a matter of urgency, Billy’s bemused but promises he will look into it. Lauren and her mates approach Bethany and make snide remarks about Harry calling him ugly. As Bethany tries to shake off the bullies, Nick comes to her rescue. When Lauren gives Nick some backchat, Nick suddenly loses it and grabbing Lauren’s bag, hurls it into the road and the girls are shocked.

Excited at the thought of Maria’s return, Luke tells Kirk he’s bought Liam an ‘I Love Weatherfield’ t-shirt as a welcome home present. Luke arrives back from the airport with Maria. He’s clearly thrilled to have her home but Maria appears uneasy. When Kirk presents Liam with an ‘I Love Weatherfield’ t-shirt, Luke’s angry that he openly stole his idea.

Izzy calls in the gym and begs Gary to contact Dane and buy her some more cannabis as the pain has become unbearable. Gary reluctantly agrees. Dane calls in the gym with the drugs for Gary. As Gary quickly hustles him out of the door, Sharif watches, suspicious.

After a phone call with Joseph, Chesney’s saddened, wishing he could see more of his son. Sinead feels for him. Tyrone and Fiz have a clear out of junk. As Tyrone sets off for the charity shop, Cathy points out some of it could be worth good money. Nick’s fed up when the restaurant he was after in Devon is taken off the market. Aidan wonders if Sinead would be up for another modelling gig. Sinead’s unsure but when Fiz points out she could use the money to take Chesney to Portugal to see Joseph, she agrees.

Freaked out by his actions, Nick wanders off in a daze. PromisingBethany she’s not heard the last of this, Lauren and her mates head off. Sarah announces that she’s hoping to have Harry christened next week and that she’s going to ask Todd, Nick and Carla to be godparents. Sarah summons Nick to No.8. Worried she’s going to tear a strip off him for the way he handled Bethany’s bullies, Nick’s relieved when she asks him to be Harry’s godfather and accepts. Nick thanks Bethany for keeping quiet about the incident with Lauren. Bethany points out that his outburst has only made the situation worse. The Platts are taken aback when Lauren and her mum barge into No.8 and accuse Nick of assault. Nick confesses to David how he reckons he has to accept he’s brain damaged for life.

In the salon, Maria is regaling tales of Cyprus. Her phone rings and seeing that it’s Pablo, Maria quickly heads outside to take the call. Later, Maria’s angry to find Pablo on her doorstep. Telling him Luke’s upstairs, she quickly dispatches him promising she’ll be in touch tomorrow. Pablo kisses her on the cheek as Audrey watches from across the street.

Outside the gym, Dane gives Gary the cannabis,unaware that Sharif is watching on CCTV. Sharif confides in Zeedan that he reckons Gary’s dealing steroids and he’s going to watch him like a hawk until he has concrete evidence.

Fiz arrives home to be greeted by a mountain of junk in the living room. Tyrone explains that people pay good money for scrap metal and he intends to make some cash but Fiz is sceptical. When Sinead finds Chesney and Gemma sharing a laugh in the kebab shop, she feels a little jealous. Still smarting, Sinead tells Chesney how she’s got another modelling job and intends to use the cash to take them to Portugal and Chesney’s thrilled. 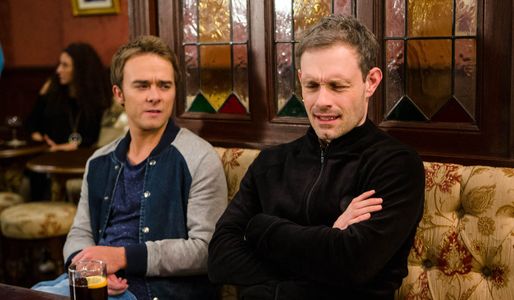