Coronation Street 11/05 - A mystery buyer swoops into the Rovers

As Liz shows the first lot of potential buyers round the pub, Michelle is horrified, realising they intend to move in and take over. So when a solicitor for Travis Ltd arrives, making out his client would simply take his share of the profit and leave everything else to them, Steve agrees to sell his share of the pub. Having overhead this Todd informsTracy that Steve has sold his share of the Rovers to a company called Travis. Tracy’s furious and storms into the pub to confront Tony. Within earshot of Liz, will Tony be able to explain himself!

Sean’s nervous about attending Billy’s church Bring and Buy sale, explaining to Julie how nobody must know they’re a couple. Mary, Julie, Eileen and Adrian all lend their support at the event, despite Eileen lamenting how she’d rather be sunning herself in Dubai than spending the evening at a Bring and Buy! When Billy persuades Sean to sell raffle tickets, Sean tries to sell some to the Bishop. Will he arouse suspicion about their relationship?

Desperate to avoid spending time with Miley, Faye hangs around in the corner shop. Meanwhile when Tim calls at the flat with a huge teddy for Miley, Anna’s unimpressed, pointing out they’ve little enough space as it is.

Kevin attempts to build bridges with Sophie, will she agree to move back to No.13.

Fobbing Liz off with a story about how he borrowed some money from the Barlow’s Buys safe, Tony drags Tracy out to the back yard, explaining that he is Travis Limited and she nearly blew their plans sky high. Tracy’s thrilled to think the pub will soon be theirs. At Tony’s insistence, Tracy calls in the pub and apologises to Liz for her earlier behaviour. But as Tracy puts pressure on Tony to put phase two of their plan into operation and relieve Liz of her half of the pub, will Tony feel a stab of guilt about his impending betrayal?

Billy calls at No.11 and explains to Sean how he’s told the Bishop he can’t live a lie, that Sean is his boyfriend and that he has to accept it. Sean’s stunned, realising the enormity of Billy’s gesture. Has Billy put his career on the line for Sean?

Anna pours out her heart to Roy wondering where she went so wrong with Faye.

Jenny enquires about renting a house, telling the agent it’s for she and her son! 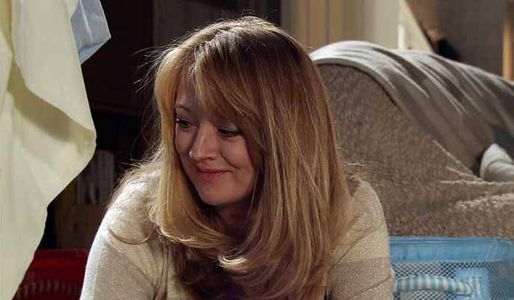