Roy supports a frightened Hayley by attending Jane’s funeral. When hearing Jeff’s confession, his words resonate with Roy. Will Roy finally give his consent to Hayley’s decision to commit suicide?

A distracted Peter suggests Simon play with Grace and Faye, but what will the manipulative Grace do?

Tina doesn’t like David’s presence in the flat and thinks he's being a sponger. She tells him he needs to sort his life out if he ever wants to win Kylie back.
​
Elsewhere Eileen wants to persuade Steve to give Todd a job.

Roy tells Hayley he will support her decision, however when Hayley begins to reminisce about the past and chat about the music she would like at her funeral, Roy can’t handle it and he leaves. He bumps into Anna and confesses that he lied to Hayley to keep her happy.

Peter tries to explain Simon’s theft to an angry Dev. Leanne accuses Peter of not spending enough time with Simon and her words hit a nerve. Carla suggests Tina could help them out and watch Simon.

David blows Tina’s money on alcohol to drown his sorrows, leaving her furious.

​Elsewhere an ungrateful Todd gets a job, whilst Owen’s suspicions about Grace peak. 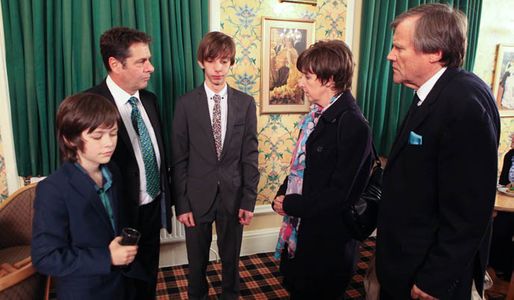