by Pascale Day Published on 1 March 2016

When Eileen asks Jason to run her to the bank, Phelan steps in and offers to take her instead. Andy’s suspicious and voices his fears to Michael, who’s a man on a mission. As Phelan and Eileen make to leave, Eileen’s incensed to discover Michael hiding in the back of the van intent on spying on them. Eileen’s furious, telling Todd Michael’s now right to worry he might lose her. Finding Michael’s wallet in the van, Phelan calls at No.11, where Eileen’s clearly upset. Phelan puts a comforting arm around her, just as Michael lets himself in. How will he react?

When Kylie arrives at client Sadie’s house for a nail appointment, she’s shown in by husband Freddy, who explains that Sadie’s died and he’d like her to do Sadie’s nails for her funeral. Putting thoughts of Callum’s body aside, Kylie sets to and Freddy’s grateful. Meanwhile Audrey and David are stunned when the new work experience girl arrives at the salon and it’s none other than Gemma!

When Zeedan clocks Jason chatting up Rana in the bistro, he sees red and warns her Jason’s bad news. Rana enjoys their obvious rivalry.

With the intention of checking on Marta, Eva and Billy approach the O’Driscolls’ house. When Richie approaches the car, Eva quickly ducks out of sight.​​​

Michael’s furious, convinced he’s caught Eileen and Phelan in the act. Michael takes a swing at Phelan with his crutch but falls to the floor. Eileen’s mortified and tells Michael their relationship is over. His contempt for Phelan palpable, Michael drowns his sorrows in the pub. Gail’s pleased to hear from Liz that Eileen’s finished with Michael. Audrey coolly points out to Gail that Michael is not much of a catch. Meanwhile Eileen’s poleaxed when Phelan declares that Michael was right and he does in fact have feelings for her!

Kylie gets a shock when she arrives back at the salon to find Gemma there. Tearful Gemma pleads for a chance to turn her life around but David wants her out. Gemma makes to leave but bumps into a pregnant Sarah - the cat’s out of the bag. Gemma deduces that Callum is the father and threatens to tell him unless she keeps the job. When David calls her bluff, Gemma gets her mobile out. The call goes to voicemail but Gemma claims she only spoke to Callum the other day. Spotting an opportunity to have Gemma mouth off about Callum and therefore convince people he’s still alive, David persuades Audrey to keep Gemma on a trial basis.

After Jason and Zeedan almost come to blows, Rana notices how Alya and Jason were looking at each other and demands the full story. Rana listens as a shamefaced Alya reveals her fling with Jason. Rana makes light of it and admits she enjoyed seeing macho Zeedan. Letting herself into the Bistro kitchen, Rana flirtily kisses Zeedan, will he respond?

Billy quizzes Julia and Richie on their doorstep. They claim that Marta has returned to Poland with the stolen jewellery but they’re just happy to see the back of her. Eva tells Billy she thinks she saw Marta through a window and wants to investigate. Billy tries to persuade her to back down. Sally persuades Tim to pose for some promotional photos.​​​ 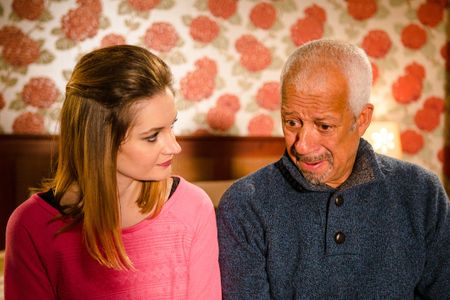