As Gail, Audrey, Kylie and Bethany prepare for a pampering party to welcome Carla to the family, twitchy Sarah makes a dart for the door. Gail grabs her arm and in so doing sends Bethany’s tray of drinks flying. Carla arrives to complete mayhem. Sarah resorts to drastic action in an attempt to escape the party, and ends up in hospital with baby Harry.Kylie’s deeply suspicious. When the doctor confirms there’s nothing wrong with Harry, Kylie givesSarah a piece of her mind.

Scheming Phelan suggests to Jason it’s time to start sorting out Tony’s affairs and offers to help him sell Tony’s property. Naïve Jason’s grateful. Jason apologises to Gemma for the way he treated her the other day and suggests they meet for a drink. Gemma’s thrilled and joins Jason for a drink in the Rovers but she’s disappointed to realise Eileen and Phelan are there too.

When Jenny calls in the café and waves at Jack, Sally and Sophie are quick to intervene, telling her to stay away from him. Johnny watches, concerned. Taking their lead from Sally, the factory girls give Jenny the cold shoulder and Johnny feels sorry for her.

Preoccupied by his brain injury, Nick snaps at David for failing to organise the stag party and enlists the help of Steve instead. When Tim announces he’s booked a surprise mini-break, Sally’s thrilled while Beth and Sean are envious. In an effort to bond with Alex, Roy insists they attempt a jigsaw together. Bored, Alex suggests they play on his Xbox instead. 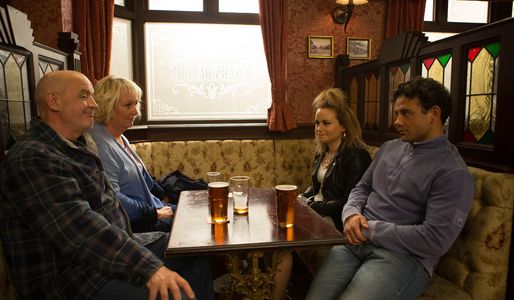