Coronation Street 12/07 - Lloyd accuses Paul of being a racist

Paul's had a stressful day and could lose his job because he's under investigation for his run-in with the hoax caller. He decides to head to the pub for a game of darts with Steve and it looks like his luck has changed when his last dart wins the game. But when the dart falls, the men bicker over who's won and Paul tells Steve to "play the white man". Lloyd's horrified and accuses Paul of racism.

Elsewhere, Peter tells Carla he'll turn things around at the bookies' by offering the most competitive odds in town. Carla knows in her heart that it's a desperate move, but she backs him.

Also, Chesney realises how much he's hurting Sinead and apologises, admitting he's finding it difficult to move on. Sinead's understanding but says her goodbye, telling him he knows where to find her when he's ready. Anna Owen and Fiz decide to play Cupid with Chesney and Katy.

Jason dives in to prevent a fight between Paul and Lloyd. Paul demands Lloyd apologises for calling him a racist but most people seem to be siding with Lloyd. A mortified Eileen drags Paul home, where she and Jason confront him over what he said.

Meanwhile, Lloyd opens up to Steve about the racial abuse he's suffered over the years. When Eileen tries to defend Paul, a row brews between the old friends.

Elsewhere, Katy says sorry to Chesney for hurting him and begs for another chance. Chesney's torn - he's still angry, but part of him wants Katy more than anything.

Also, David decides to take the next step with his revenge plan as he's helping out at the Bistro with Kylie while Nick's away with Leanne. 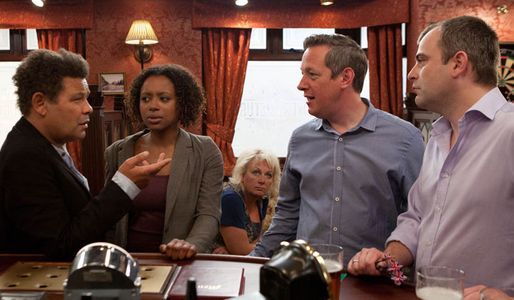