Weighed down by guilt, Leanne agrees to let Simon have the day off school. Simon’s delighted, unaware of her turmoil. Having chosen a DVD, Simon snuggles up to Leanne on the sofa. But they’re interrupted by the police knocking at the door. Simon cries out as the police take him away for questioning. Hearing the commotion, Ken dashes across. Leanne can barely watch, hating herself for reporting her own son. Breaking down she admits to Zeedan how she reported Simon to the police, not just for injuring Kyle but for the abuse he’s subjected her to!

Beth shows David her awful rash and tells him Nick can expect a visit from Environmental Health. David’s horrified, realising he’s responsible for her rash. When he admits the truth to Audrey, she insists he goes to the bistro and confesses to Nick. Beth’s furious when David reveals that her rash was caused by hair dye and is nothing to do with the bistro food. She turns on Kylie but they’re stopped in their tracks when the Environmental Health Officer arrives.

Izzy confides In Erica that since dislocating her hip, she’s been in terrible pain and her painkillers aren’t working. Erica offers to get her some cannabis but Izzy’s not keen.

Ken pours out his heart to Audrey telling her all about their problems with Simon. Citing family issues, Ken tells Sally he’ll have to step down as her campaign manager. When Norris and Mary argue over which of them would make the better campaign manager, who will Sally hire?

Under the police officer's’ gaze, Simon admits that sometimes he sees red and can’t stop himself from lashing out. Ken puts his arm round him. Zeedan comforts Leanne as she waits at the station. Simon remains adamant that the incident involving Kyle was a genuine accident but when it’s obvious neither the police nor Ken believe him, he loses his temper and thumps the desk. Having been released pending an investigation, Simon refuses to speak to Leanne and asks Ken if he can stay with him. Leanne feels terrible. As Leanne, Eva and Zeedan discuss the Simon situation, Tom calls round and explaining that one of the parents recorded the match, shows them the footage of Simon’s tackle. Will the evidence condemn Simon?

As Beth and Kylie continue to hurl abuse at each other, Nick despairs. In an attempt to diffuse the situation, Audrey offers Beth a year’s free haircuts. Will Beth accept?

Izzy calls in the shop and explaining that her pain is even worse, tells Erica she’d like to take up her offer of some cannabis. Izzy and Erica meet furtively in the Rovers backyard and Erica hands over a small package of cannabis. Will anybody clock them?

Clearly at loggerheads, Norris and Mary tell Sally that she’ll have to choose between them. After some deliberation, Sally announces who will be her campaign manager. 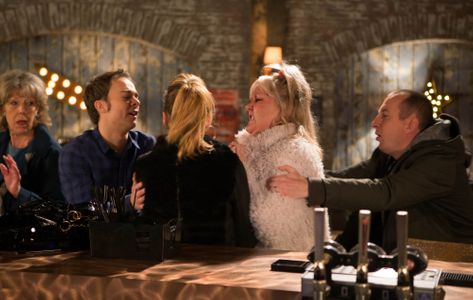