Over breakfast, Steve and Michelle continue to row. When Amy overhearsMichelle telling Steve they need to talk but it’s difficult with her around, she becomes upset. Tracy finds Amy cuddling Eccles in the backyard. Amy reveals how unwanted she feels and reminds Tracy how she was always palming her off on Emily as child. Tracy storms into the pub and accuses Steve and Michelle of making Amy feel unwanted. While they argue, Amy runs away. Michelle finds Amy at the bus stop and persuades her to come home. Sick of all the fighting, is this the final straw forMichelle?

When Billy tries to apologise to Sean for bailing out on their lunch, Sean tells him he’s dumped and closes the door in his face. Billy’s shocked. Clearly upset, Sean confronts Todd and accuses him of having an affair with Billy. Todd explains he was only comfortingBilly as he was upset after finding his brother unconscious in the ginnel. No longer able to deny it, Billy explains to Sean how his brother is a drug addict and, ashamed of all the lies he’s told, he tellsSean he deserves better and he’s right to end their relationship. Sean’s stunned. Billy calls at No.11and confesses to Todd that he’s finished with Sean because he’s fallen for him.

Nick confides in Leanne how much he misses Carla. Leanne urges him to look to the future. Realising she’s right, Nick suggests they meet for lunch. In the bistro he knocks back the wine and causes a scene in front of the other diners. Robert begs Leanne to get him under control but Leanne refuses, pointing out Nick’s every right to be angry at the way Robert’s treated him.

Tim enlists Craig’s help to get the last batch of beer bottled and the conservatory tidied up before Sally returns from London. When Sally gets home she’s horrified to find her conservatory swimming in ale. When a beer keg explodes, soaking her new outfit, Sally turns on Tim ordering him to clear up the mess. Sophie cunningly suggests she should buy a summer house then Tim could use it for his brewing and she could get one up on Yasmeen. As the congregation file out of church,Marion introduces herself to Billy and asks him if he’d conduct Callum’s funeral. Kevin, Anna, Izzy and Gary agree to start afresh and enjoy a day out at the Red Rec.​​​ 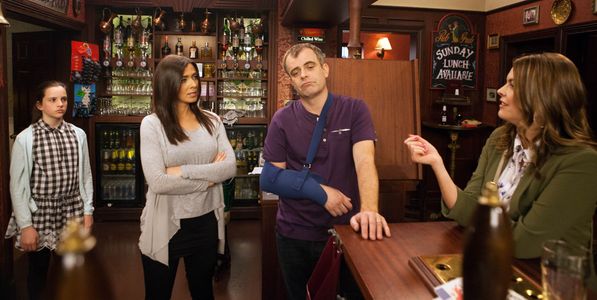 Coronation Street 13/6 - Jason's determined to get to the truth