When Maria reveals that Aidan’s got her an interview for a job at a local factory, grateful Caz instinctively kisses her on the lips. Maria’s confused by the gesture. Kate’s pleased when Aidan reveals he’s trying to find Caz a job to get rid of her. Aidan’s contact Vanessa interviews Caz. All’s going swimmingly until Vanessa explains the job is based in Newcastle. Insisting she can’t leave Weatherfield, Caz turns down the offer. Troubled Maria admits to Audrey and Sophie that Caz kissed her. Pointing out that Maria’s a magnet for the gays, they all fall about laughing. ButMaria’s mortified to find Caz has walked in and heard every word. Caz flees, humiliated. Maria tells Sophie that Caz has packed her bags and left. Fearing what she might do, Maria enlists reluctant Sophie to help search for her.

Beth vows to make amends with Craig by visiting the police station and forcing them to reconsider his application. Proud of her ingenuity, Faye confides to Anna that she’s written to Craig’s dad in prison on his behalf. Anna’s appalled and marches round to seeCraig. Craig and Beth are furious to learn of Faye’s interference. A row erupts as Sinead arrives with a letter for Craig. Craig tears it open and announces that his dad wants to see him. Beth’s devastated.

​​Billy assures a sulky Todd he’d like nothing more than to live together but it’s just not possible. Todd’s placated by Billy’s words. Meanwhile as Billy and Todd join Sean’s friends in the Rovers for a birthday drink, Billy gets a phone call from his bishop with some disturbing news.

Robert persuades a reluctant Steph to cover for Leanne as Bistro manager and instantly tasks her with overseeing a booking for a party of 20. How will Steph cope? Sean’s fed up on his 40th birthday, living with Norris and stuck in the same old job. He’s underwhelmed when the factory girls suggest drinks in the Rovers to celebrate.

Having trawled around town searching for Caz, Sophie and Maria finally track her down to a hostel. Maria pleads with Caz to come home.Arriving back on the street with Caz, Maria berates Aidan for tricking her about the Newcastle job and makes a dig about his honesty in front of Eva. Aidan’s unnerved. Alone in the flat, Caz and Maria agree to forget about the kiss. Full of thanks for Maria’s support, Caz vows to repay her in unwavering loyalty. Aidan tackles Maria about her earlier jibe in front of Eva. Maria agrees to drop it but as Aidan warns her that Caz is trouble, she’s clearly denying her burgeoning feelings for him.

Craig’s in turmoil as Beth forbids him from visiting his father, insisting he’s a liar and a criminal. Tim counsels Craig on the pros and cons of meeting his dad.Reaching a decision, Craig tears up Darryl’s letter. Beth floods with relief as Tim confirms Craig’s decided not to meet his dad. Meanwhile Craig has a change of heart and books a prison visit. After drowning his sorrows in the Bistro, Craig returns to No.4 and throws up on the carpet. It’s the last straw for Sally who demands Craig and his rat move out.

Downcast Billy says the bishop’s had a complaint about Todd staying at the vicarage. As she comforts Billy, Eva can’t help glancing over at Sean. Following her gaze, Billy cottons on to her suspicions. Having heard from Eva how he tried to sabotage Todd’s hotel surprise, irate Billy accuses Sean of snitching to the bishop. Sean’s protestations of innocence fall on deaf ears as Billy and Todd leave. Sean blames Eva for ruining his birthday.

Having forgot the cake for the big booking Steph’s struck by an idea and calling at theRovers she begs Sean for his birthday cake. Robert’s annoyed that Steph promised Sean a free meal in exchange for his cake. Andy can’t believe Robert’s ingratitude and thinks Steph should quit in protest.​​​​ 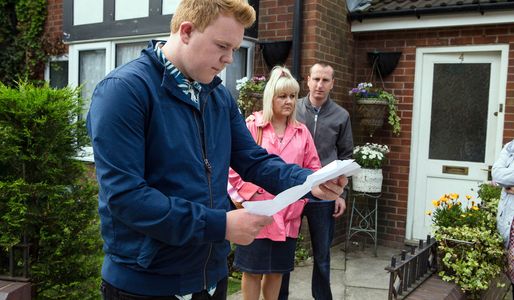 Coronation Street 29/8 - It's A Dark Day For Maria