Daniel and Adam both entertain their lady friends at the flat but Sinead feels Daniel might be moving too fast when he asks her to move in. Meanwhile Adam is stunned when Rosie confides in him about her and Sophie’s drug dilemma. Sophie tells Kevin she’s resigning from the garage and handing back her 21% share in order to save the business.

Sinead finds herself finds herself out on the street when Chesney refuses to let her stay at number 5. Meanwhile Ken has arranged a meeting for Daniel with an old friend who lectures on the course Daniel is applying for but is Daniel about to put love before his education?

When Zeedan finds some unusual pills in Yasmeen’s handbag, he’s concerned and googles the name. He’s shocked to discover they’re prescribed for MS. Zeedan and Alya confront Yasmeen with the pills. Yasmeen assures them she hasn’t got MS and the pills are for her anxiety. Realising they’re partly to blame for their grandmother’s stress, Zeedan and Alya finally bury the hatchet.

Faye confides in Bethany that Seb’s been expelled from school for thumping a lad who fancied her. Bethany reckons Seb must be serious about her. When Bethany receives a text from Nathan suggesting they do another video, she lies to Sarah making out it’s from Nathan’s assistant, Mel. Luke surprises Tracy with a trip away for Valentine’s Day.

Adam quizzes Rosie about the drugs and oblivious to his intentions she tells him everything. Adam phones a drugs contact in the States and having double-checked that Rosie’s boyfriend’s been locked up, forms a plan.

As Chesney continues to goad Daniel, Fiz and Kirk beg him to stop. Seeing how upset Sinead is, Daniel promises her she can stay with him. HAving failed to get hold of Daniel Ken calls at his flat and is taken aback to see Sinead there in a state of undress. Ken tears a strip off Daniel for putting his love life before his career.

Sarah shows Gary one of Bethany’s online videos. He’s impressed and agrees that they should be encouraging her to do more as she’s clearly talented and has so many followers. Mel calls at No.8 and tells Bethany how disappointed Nathan is that she’s not been in touch. Bethany admits she really likes Nathan but worries that he probably thinks she’s just a silly little girl. Handing Bethany a beautiful necklace, Mel explains that Nathan bought it for her next video shoot. Sarah calls in at No.8 and Bethany introduces her to Mel. Sarah tells Bethany she should continue with her videos as she’ll regret it if doesn’t.

When Luke admits he is taking her to Bristol because he wants to settle a score with Andy and that is where he thinks he is, Tracy’s disappointed, pointing out it’s hardly the romantic trip he’d promised. Kate and Rana put their heads together and try to come up with ideas for Alya’s birthday.​​​​​​​ 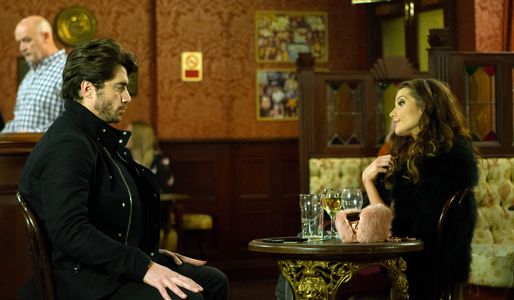