Owen warns Linda to stay away from him and the girls. Linda insists she’s a right to know her own daughters. As Owen and Linda row, Linda makes it clear she’s not going to give up without a fight. But back at home Owen tells Izzy and Katy that he’s sent Linda packing and she won’t be bothering them again. Meanwhile Faye confides in Craig that despite putting herself on a diet, she’s still gaining weight. Craig wonders if she’s pregnant. Horrified by the thought Faye takes a pregnancy test. Faye’s shocked to the core as the test proves positive!

As Dev prepares for his trip, Julie and Mary fuss over him. Mary’s unimpressed to hear that Julie will be moving into No.7 and Sophie’s even less impressed when Julie calls in the shop and explains that in Dev’s absence, she’s now her boss. Sophie and Mary complain to Dev about Julie. Can Dev smooth things over before he leaves?

Steve reveals to Liz that he’s planning to cook a lovely meal for Michelle.

Tony shows Eva some more property details of potential flats for she and Jason. David continues to search the missing persons websites in a desperate attempt to find Kylie.

As Owen, Anna and Faye attend the school art exhibition, Faye feels sick with anxiety, faced with constant reminders of her own awful situation. When Anna tries to hug Faye, Faye recoils, worried that Anna will detect her baby bump. Anna’s hurt as Faye confides in Craig how scared she is at the thought of having a baby and petrified that Anna will disown her.

As Dev prepares to leave, Mary and Sophie demand that he lay down some ground rules to Julie. Dev nervously suggests that Mary should be in charge of the children, Sophie the shop and that Julie should help out where necessary. How will Julie react to this as Dev gets an emotional send off?

Steve surprises Michelle with a romantic dinner in the back room of the Rovers. Michelle’s touched, despite it not going quite as planned.

Callum meets up with Katy in the Rovers. Spotting David he asks him when he can next see Max. David tells him never. But Callum won’t take no for an answer and warns David he’s not heard the last of him. Sean and Billy share a kiss as they join Eva for her birthday dinner in the bistro. 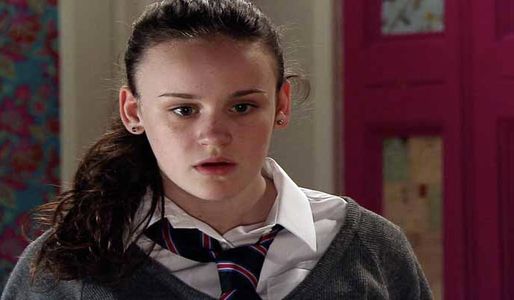