Mel seeks out Bethany, telling her Nathan’s been wrongly arrested for assault and needs an alibi. Worried he won’t make Sarah’s dinner, Bethany resolve to do what she can to secure Nathan’s release. Calling at the police station Bethany gives a false statement, making out Nathan was with her on the evening of the assault. Nathan’s released and Bethany’s thrilled as he tells her how amazing she is. But as they head to the Platts how will Sarah and Gary react to realise that Nathan is older than they are?!

Aidan confides in Johnny that Maria’s due out of prison and he’s dreading it in case she spills the beans about their affair to Eva. Forming a plan Johnny waits for Maria at the prison gates.

Chloe bumps into Peter and feigning tears she tells him her ex is stalking her and she’s scared to go home. Peter insists on driving her home and making sure the coast is clear.

Anna’s embarrassed at not being able to afford much for Faye’s birthday. Clocking this Roy hands her a £100 bonus which Anna gives to Faye as a belated present. Kevin’s unimpressed. Toyah suggests to Tracy that she should consider buying the the flower shop premises herself.

Over dinner Nathan does his best to charm Sarah, promising her he only has Bethany’s best interests at heart. Gary’s unconvinced but Sarah insists she has little choice but to accept Nathan if she wants to remain on good terms with her daughter. But how will Bethany react when Sarah and Gary tell her they intend to buy a house together?

Michelle hacks into Steve’s email account, determined to find some dirt on him. Meanwhile Johnny offers to pay for a holiday for Maria and Liam in return for her silence. How will Maria react to this, has Johnny made matters worse? As Maria’s welcome home party gets underway, will she blow Aidan’s secret?

Phelan slips Seb some cash and advises him to get Faye a birthday present if he wants to keep her sweet. Faye’s suitably impressed but Anna’s horrified to discover Seb’s been excluded from school and is working for Phelan. Seb urges Faye to use her birthday money to get his and hers tattoos. Leanne promises Steve she’ll talk to Nick about access arrangements. As he and Liz cuddle Oli, Leanne takes a picture of the three of them on Steve’s phone. Gail spots burn marks on Shona’s shoulder. ​​​​​​​ 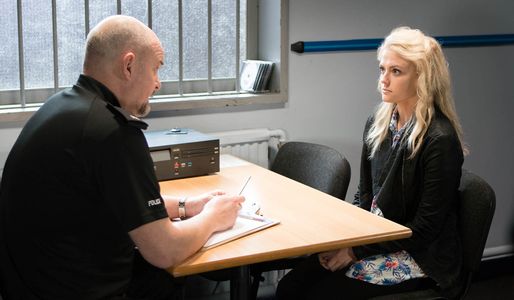