Gail and Andy call at Gavin’s flat and handing him the £2,500, tell him to stay away from Michael. As they make to leave, Andy reminds Gavin that he must get his heart checked out. Elsewhere Gail accompanies Michael to hospital for his appointment with the consultant. As Andy and Steph discuss the Gavin situation, Andy takes a call on his mobile and is clearly shocked by some news. Arriving at the hospital Andy and Steph break the news to Gail that Gavin’s dead!

As Anna and Izzy prepare for Faye’s surprise birthday party, Katy wonders how she’s going to break the news to Chesney that she’s moving abroad. Under instruction from Anna, Craig leads Faye back to the flat. As they enter, Anna, Gary, Izzy, Katy, Owen, Sally and Tim leap out shouting “surprise”. Faye does her best to appear pleased but the party is a total flop and Faye does a runner, dragging Craig with her. Unaware that Chesney is listening, Faye tells Craig that she’d really like to confess everything to Anna but feels she can’t with Katy moving to Portugal and all the upset that’s causing. Chesney’s stunned and hurries out.

Sean does his best to drum up interest in Billy’s Comedy Night. But as Sean and Billy set off for the event, Billy steals himself and explains to Sean that as he’s still very much the new vicar, he doesn’t yet want his congregation to know that he’s gay. Will Sean take offence at this?

Todd helps Eileen choose an outfit for her first internet date. Egged on by Julie and Todd, Eileen sets off to meet him. Zeedan settles down in front of a DVD and makes it clear that Simon isn’t welcome to join him. Leanne tells Zeedan not to take his dislike of her out on Simon.

Andy explains how Gavin was drink-driving, crashed the car and killed himself. Gail’s horrified whilst Andy’s consumed with grief for his old mate. Andy blames himself for Gavin’s death, pointing out that if they hadn’t given him the cash he wouldn’t have been drunk and driving like a lunatic. Meanwhile a downcast Michael emerges from the consultant’s room and breaks the news to Gail, Andy and Steph that his operation was unsuccessful and his only hope now is a transplant. Shaken, Gail tells Andy that for the sake of Michael’s health, he must always remain as Gavin, Michael’s son. Trapped in another man’s life, can Andy keep up the lie?

Chesney barges his way into Faye’s party and confronts Katy, telling her there’s no way she’s taking Joseph abroad. Katy and Linda try to persuade Chesney that a new life in Portugal is the best thing for Joseph but Chesney’s adamant he’s better off here with his family. Talking to Owen, Chesney’s adamant that Katy’s only thinking what’s best for her, not for Joseph. Will Owen agree?

As Sean lays into Emily, calling her a homophobe and a bigot, Billy arrives. Emily’s shocked and assures Sean she is neither but just a traditionalist when it comes to her faith. Realising he misjudged the situation, Sean offers an embarrassed apology. But how will Billy react Sean’s actions?

Zeedan thaws towards Simon. As Eileen waits for Adrian her internet date she gets cold feet and after phoning him they agree to get to know each other a bit better before meeting up. Todd’s secretly pleased. When David opens a letter from his solicitor suggesting mediation with Callum, David despairs, worried he’ll lose Max for good. 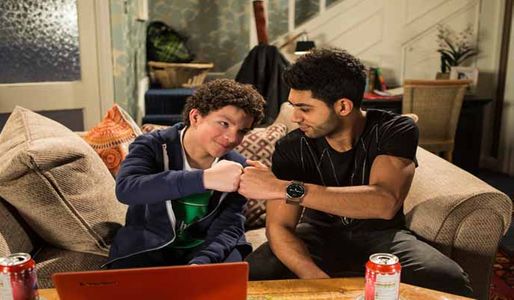