As Jason calls the police, Craig prepares to make a statement to the police about what he saw on the night of the Rovers fire.

Meanwhile, Dev's arrived at the registry office and glares at the man he knows killed Sunita.

Elsewhere, Jenna tries to cheer Sally up with a bottle of wine and a DVD, insisting she can do better than Tim. She urges Sally not to give Tim the benefit of the doubt.

After another run-in with Marcus, Audrey breaks down and admits life is getting her down.

Will Karl manage to get away to Spain with Stella, or will the police come calling before he escapes?

Elsewhere, Sally's gutted when she receives a dismissive text from Tim - he clearly doesn't feel guilty about standing her up.

Also, Owen expresses an interest in Audrey's flat when she hints that running two properties at her age is getting on top of her.

Meanwhile, Grace makes a good impression on Owen and Anna, but we see another side to her when Faye admits how much she hates Sally. 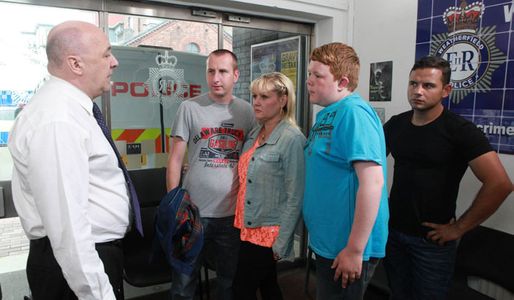