As David tries to allay Kylie's fears about Tina, he's a bag of nerves as the DNA test results arrive. As he opens the letter and the results sink in, he's emotional and Tina gives him a hug. Kylie sees and is heartbroken.

Meanwhile, even though he;s due to come home at the weekend, Nick's in a foul mood. He's sick of hearing about Lily's christening. A concerned Leanne asks the rehab nurse about Nick's anger.

David visits the hospital to show Nick the results and the boys hiss insults at each other. David leaves, not realising he's left the letter - which Leanne then picks up!

Elsewhere, Roy struggles with the conversation topic when Jane and her husband Jeff call round to see Hayley.

Also, Steve breaks the bombshell to Michelle that he's bought The Rovers. She's stunned when she walks into the empty pub but can Steve win her round when he recounts all the great times they've had there? 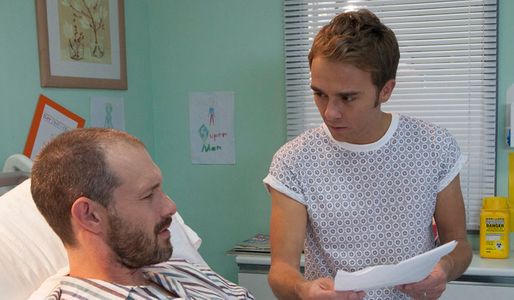