When the hospital tries to phone Nick, he kills the call and covers,making out it was a wine company. Carla’s none the wiser. Nick’s stag do takes place in the Rovers with Johnny, Dev, Aidan, Robert, Luke, David, Tim and Kirk. David finds Nick in the Rovers back yard clutching his head. Nick admits he lied about being given the all clear and his brain injury is worse than ever. He’s unable to control his temper and frightened he could hurt Carla at any time.Reaching a decision, Nick announces that the stag do is cancelled and the wedding is off. David andRobert are stunned.

Each dressed as Carla, the hens (Beth, Kate, Michelle, Maria, Sally, Caz,Gail, Kylie and Cathy) set off to a club in town. In high spirits, Gail and Kate wrestle over the DJ’s microphone, each wanting to say a few words about Carla. In the scuffle, they damage the DJ’s equipment and club manager intervenes.

In the factory, Sally reads out the clues Tim’s given her regarding the surprise mini-break. When Jenny works out that their destination is Blackpool,Sally’s gutted. When the factory girls rib Sally by sticking pictures of Blackpool to her machine, she rips them down and thrusts them at Jenny ordering her to put them in the bin. Johnny finds Jenny alone in the factory, crying over the pictures of Blackpool. Jenny explains how the last time she visited was to identify her dad’s body. Johnny offers her a comforting arm.

In an attempt to find some common ground with Alex, Roy studies some computer game crib sheets on the internet. Cathy’s impressed. Sinead calls in the café and finding Roy struggling with an Xbox, offers to give him some pointers. Craig sets off on another date with Caitlin who drops the bombshell that she’s moving to Dundee.

Robert and David listen with incredulity as Nick explains his brain damage has returned and he doesn’t want Carla to marry him out of pity. Having returned home, Robert confides in Tracy that Nick wants to cancel the wedding. Tracy’s furious, convinced he’ll want to get his hands on the bistro again. Nick breaks the news to Carla that much as he loves her, he can’t marry her. She’s stunned.

When Johnny finds Jenny in the Rovers back yard gazing at the stars, he suggests she should return to Blackpool in honour of her dad and offers to accompany her.Jenny’s touched.

After a call from Sally, Tim announces that all the hens have been arrested.The stags arrive at the police station to collect their drunken other halves. Sally’s miffed to realiseTim hasn’t turned up. Having been released without charge, the hens return home and Sally rails atTim for failing to come to her rescue. But Tim calls her a snob and explains he booked the break inBlackpool hoping they could rebuild their relationship. Sally’s taken aback.

Clearly on edge, Sarah carries Harry into the annexe and talks to Callum’s dead body telling him how much she hates him. Craig offers to move to Dundee to be with Caitlin, how will she respond? When the Xbox fails to work, Roy suggests a game of Monopoly instead. Alex is underwhelmed. All set for her romantic evening via video link, Sinead’s gutted when Chesney bails,explaining he’s stuck at a beach party. Together Roy and Alex come to the aid of a drunken Cathy.​​​ 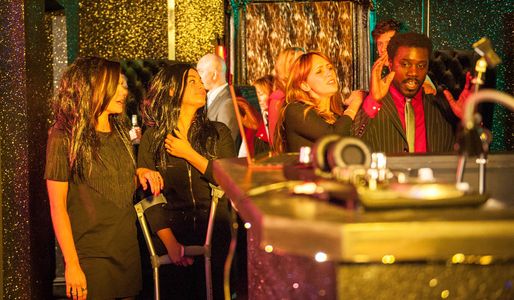