Coronation Street 13/6 - Jason's determined to get to the truth

Clearly agitated, Jason explains to Todd and Phelan that the police have been searching Tony’s flat when to his mind, they should be focusing on DavidPlatt. Jason marches into the salon and accuses Kylie and Audrey of covering up for David when they know he murdered Callum. In the Rovers, David lays into Jason telling him to stop harassing his family and Steve steps in to prevent a fight. The police search the builders’ yard for the murder weapon. When they quiz Jason, he fails to mention Tony’s tool bag stored at No.11. Kylie assuresDavid she washed the murder weapon thoroughly and replaced it in Tony’s tool bag. At No.11, Jason stares at Tony’s tool bag and admits to Phelan that it might contain the murder weapon.

Gary, Anna and Erica arrive at the magistrates’ court for Izzy’s trial. When the prosecution cross-questions Izzy, she loses her temper and tells the court she has no regrets; she needs cannabis to lead a normal life and the police officer deserved all he got. Has she made things worse for herself?

Michelle admits to Maria how she wishes she’d never stormed out and hopes that Steve will take her back. Michelle supervises the removal men as they pack up Carla’s furniture and hatches a plan to try to win Steve round. Hoping Steve will ask her to move back in, Michelle calls at the Rovers and fills a box with some bits and pieces that she needs.Steve remains frosty, but offers to carry the box round to Carla’s flat for her later. Elsewhere, in the factory lovesick Sean laments the fact he’s lost Billy. Eva is sympathetic while Alya urges him to try to win Billy back.​​

Jason demands Todd tell him the truth about Tony.Todd sticks to his story, that Tony confessed to Callum’s murder and he believed him. With Jason outof the way, Phelan removes Tony’s tool bag from No.11 and hides it under the floorboards at theNazirs’. When Sarah suggests she’d like to attend Callum’s funeral as it might help her move on,Billy’s adamant it’s a terrible idea. Jason returns home to find the police there - they know what kindof weapon was used in the murder. Clocking the missing tool bag, Jason panics but Phelan shootshim a reassuring glance. Has Phelan saved the day?

Izzy, Gary, Anna and Erica wait with baited breath as the magistratedelivers the verdict. When Izzy is found guilty and released on bail pending sentencing, Izzy looks atGary, horrified. Having returned home, Anna tells Izzy that from now on she has her total support.However, Gary tears a strip off Izzy pointing out her principles could land her in prison.

Steve calls at Carla’s flat with her box of bits.Michelle persuades him to stay and talk but their conversation soon descends into another row andSteve heads out, fed up. Michelle kicks herself, wishing she’d never left in the first place.

Kate and Maria enjoy a belly dancing class at the gym. When jealous Caz suggests toKate that she’s suddenly become very pally with Maria, Kate’s annoyed and tells her to get a grip.Sean begs Billy to give him another chance before asking Todd to speak to Billy for him. Conflicted byhis own feelings, Todd advises him to give Billy some space.​​​ 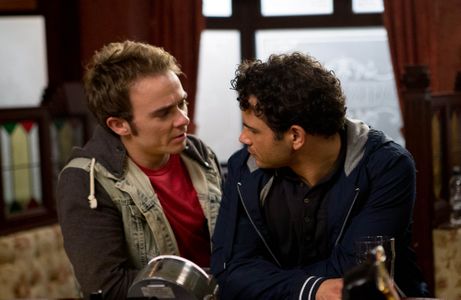