Kylie picks up Bethany’s phone and is horrified to read all the bullying texts from Lauren and her mates. Bethany breaks down and admits how she wanted to confide in her mum but she’s too ill. Kylie’s consumed with guilt. Bethany reveals to Kylie how she messed up her exams and the only person who knows about it is Gail. Kylie blames herself, realising to what extent her actions have caused pain for her family. With the place to themselves, David suggests an afternoon in bed but unable to deal with her mounting guilt, Kylie flees from the house leaving David frustrated.

When Sophie spots Caz’s army welfare officer knocking fruitless lyon Caz’s door, she suggests she tries the bistro in the knowledge that she’ll be there. The welfare officer confronts Caz telling her they need to discuss her court martial proceedings and wanting to know why she missed her physio appointment. Kate wonders what’s going on. Making out the army welfare officer just wanted to go through some paperwork, Caz suggests to Kate they should elope.Kate’s taken aback but promises to consider it. When Kirk lets slip that it was Sophie who told the army welfare officer where she could find Caz, Caz is furious.

As Simon readies himself for school, Leanne does her best to disguise her morning sickness. Steph calls on Leanne and is taken aback to spot a pregnancy tester kit in her bin. Leanne covers making out it’s Eva’s and it proved negative.

When Ken tells Freddie that he’s thinking of going to see a play the following evening,Freddie suggests he should invite Audrey along too. In the kebab shop, Clayton forces Gemma to change some forged £20 notes for him by threatening to reveal her dodgy past to Chesney if she doesn’t comply. After a pleasant afternoon shopping together, Gail buys Michael a drink in the bistro. Thanking Freddie for his intervention with Ken, Audrey squeezes his hand. Ken approaches but clocking their affection, beats a hasty retreat feeling stung. As Michael and Gail head home, Gail tentatively suggests he’d be welcome to stay the night. Michael’s pleased and accepts. Troubled Kylie watches them from across the street.​​​ 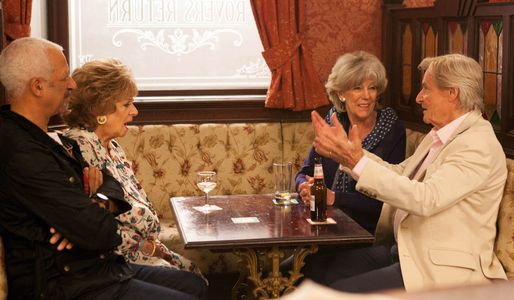 Coronation Street 2/3 - Will Aidan and Eva be caught red handed?