Pat calls in the cab office and apologises to Eileen if he came on too strong. Enjoying the flattery, Eileen suggests lunch in the bistro. When Anna spots Eileen and Phelan enjoying an intimate lunch she’s horrified. Izzy urges her to warn Eileen what he’s capable of. Eileen takes Pat back to No.11 and whilst she makes coffee, her phone rings. Seeing the caller is Anna, Pat kills the call. Pat confides in Eileen that if they’re to have any chance of a successful relationship, then there’s something he needs to tell her about Anna.

When Gemma rolls in late and shows more interest in gossiping than work, Kylie puts pressure on David to fire her. As Gemma makes out to Rita that she’s in contact with Callum, Rita urges her to go to the police. David’s had enough and sacks Gemma, telling her she’s not cut out for hairdressing. How will Gemma react when she discovers it was Kylie’s idea to get rid of her? Meanwhile Freddie calls in the Salon and asks Kylie if she’ll join him for a drink by way of thanks for her help. Kylie’s sympathetic as Freddie reflects that life will never be the same without his beloved Sadie.

Rana lets herself into No.6 and finding Zeedan alone flirts with him. Smitten, Zeedan invites her for dinner. As Rana and Zeedan kiss, Rana voices her concern at Alya’s reaction to their relationship but Zeedan assures her it’ll be fine. As Rana and Zeedan settle at their bistro table, Rana’s unnerved to spot her ex Javed.

Norris and Sally vie for Rita’s vote but she refuses to be drawn. When Norris then calls in the factory and hands out chocolate bars in a shameless attempt to buy votes, Sally’s furious.

Pat spins Eileen a story, making out that Anna used to fancy him and they had a one night stand which he immediately regretted. Having swallowed Pat’s lies, Eileen thanks him for being honest with her. Pat leaves, pleased to have pulled the wool over her eyes. Anna calls at No.11 and stells Eileen the truth about Phelan and how he forced her to have sex. Eileen’s disbelieving. As Anna heads home deflated, Phelan approaches and giving her an evil smile, tells her he got to Eileen first and he intends to stick around.

When some youths give Chesney a hard time in the kebab shop, Gemma comes to his rescue. Chesney’s grateful and promises to talk to Dev about giving her a job.

To Rana’s horror, Javed parks himself at their table and warns Zeedan he’s a mug if he’s considering a relationship with her. Rana convinces Zeedan that Javed is still hurting after being dumped. Zeedan smiles at her, the chemistry between them evident.

Ken invites Audrey for a drink and is pleased when she accepts. But when Audrey insists they join Kylie and Freddie in the Rovers he’s put out. A clearly depressed Michael pours his heart out to Gail, who listens wistfully. When Eva raises the subject of Marta, Aidan gives her short shrift and Eva confides in Billy that they’ll have to tackle the problem between them. Norris confesses to Rita how much he misses Emily and how the council election is just a distraction. 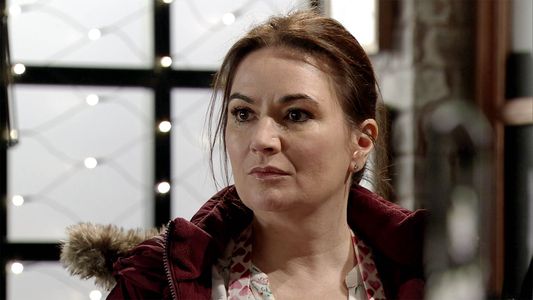 Coronation Street 01/01 - Anna Regains Consciousness To Find Phelan Above Her...