Ken is shocked to hear from Rita about Simon’s behaviour in the Bistro. Leanne is furious when she catches Simon trying to sneak off to football practice and tries to block his path. But determined to go to football Simon grabs Leanne by the hair. Desperate to get him off her Leanne pushes him off and Simon stumbles and cuts his arm. Horrified over her actions Leanne rushes Simon to the medical centre. But when Ken invites them both round to the house to ask them what’s been going on, will they hold their counsel, or will Leanne finally find a confidante?

Lloyd answers Andrea’s mobile and is left gobsmacked by what he hears. Andrea is mortified when Lloyd confronts her about the record dealer who phoned her, wanting to know if she had any more rare records to sell. Knowing she’s been rumbled, Andrea begs Lloyd to understand why she did what she did - but can Lloyd forgive her betrayal?

When Steph overhears Maria arranging to meet a man in a carpark, she hurries over to the garage to break the news to Luke that she must be cheating on him. Wanting to catch Maria in the act, they head off to the carpark and when they get there Steph confronts Maria. But when Maria reveals what she’s actually up to, how will Steph and Luke react?

Steve is delighted when he opens the backdoor to find Rover sat there looking up at him, but Liz tells him he has to return the dog to her rightful owner. Robert tells Tracy he intends to find somewhere new to live.

Simon begs Leanne not to tell Ken the truth about his behaviour and not knowing what else she can do, Leanne reluctantly agrees and keeps quiet as Simon tells Ken that he hurt his arm whilst messing about. Has Simon started to see the error of his ways, or will he lose his temper again knowing he’s got his own way with his mum once again?

Lloyd catches Andrea as she is loading her things into a taxi and is stunned when she tells him that she knows he will never forgive her so she has to go. Will Lloyd try and persuade her to stay, or will he let her slip away?

Maria is fuming to think that Luke doubted her and storms off, but thaws towards him when he owns up to his insecurities. Meanwhile Maria is worried when Steph tells her that the last time Luke drove a rally car he ended up in hospital.

Steve’s saddened when Rover’s owner, Paula, calls in the pub and takes ‘Boo Boo’ home. Tracy suggests to Ken that Robert move in with them but Ken isn’t so sure. But when Robert turns up at No1 with all of his belongings it seems Tracy has taken matters into her own hands! 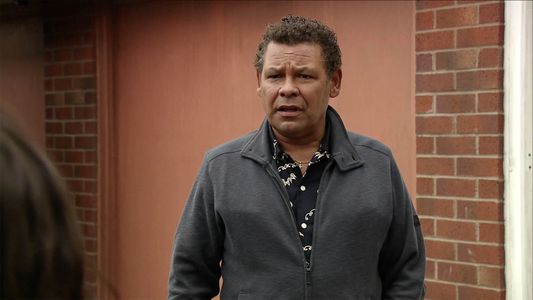